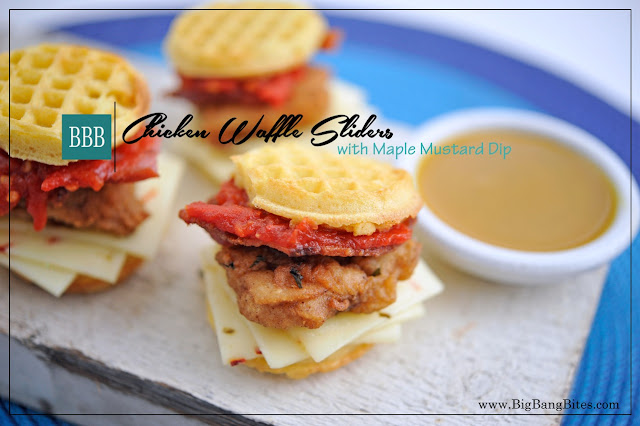 Weekend breakfasts are Kerry’s job and he usually makes waffles from scratch, whipping those egg whites while he gets the coffee going. I can’t tell you how nice it is to have comforting smells wafting from the kitchen and I’m not in there. In my next life, I’m either going to have a personal chef, so I guess I’m going to have to be really rich, or have a husband who likes to do all of the cooking. Then all I have to do is inhale all the aromas and eat.

Okay, back to reality…sitting in our pajamas and eating waffles hot out of the iron, Lindsay asks why we always freeze the leftovers instead of using them for waffle sandwiches. Well, because it’s handy to have them for quick weekday breakfasts. Nonetheless, her question stayed with me all day and I decided to turn her thought into a Big Bang Bite.

I’ve never bought those frozen mini waffles, but I thought it would be worth a try to make some sliders. Breakfast usually has something sweet and something salty, so I stuck with that inclination for fried chicken and waffles. Since these little guys would be an appetizer, I added pepper jack cheese and the  sweet tomato jam I used for my Sausage Melts with Sweet Tomato Jam. The cheese and jam give it just enough heat to creep up on you after a few bites. And instead of drizzling maple syrup on it, I made a maple mustard blend to serve on the side for dipping. My guinea pigs were squealing with delight the day I made them. 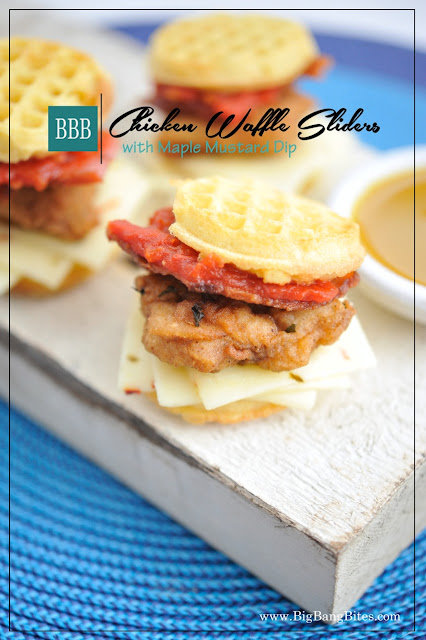 Combine the ingredients for the tomato jam and cook until boiling. Lower heat to medium and cook for about 20 minutes until it reaches a jam consistency, stirring constantly. Make the maple mustard dip and set aside. Cook the bacon in the microwave according to package directions. Mine took 2 minutes. Cut into fourths.

Salt and pepper the thighs. Combine the flour, salt, pepper, paprika, garlic powder, and parsley. Dredge the chicken and set aside. Heat the oil. Dredge the chicken again, then fry until golden. While they drain on a paper towel, set the cheese on top of each piece of chicken. This will soften and warm the cheese.

Toast the mini waffles according to package directions.

Assemble the sliders with the cheese on the bottom, chicken, bacon, and tomato jam. Serve with the maple mustard dip on the side.