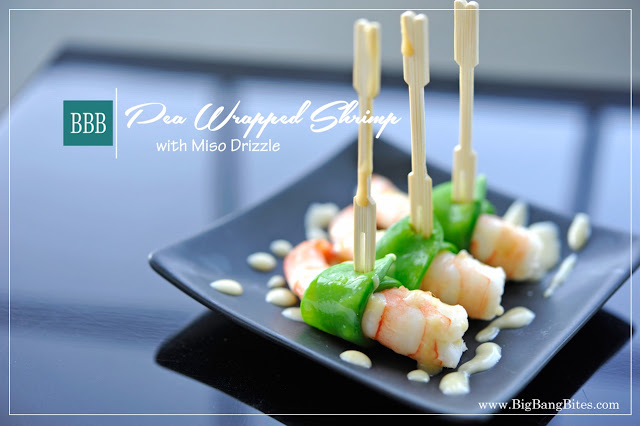 It’s snowing in my garden! With a bounty of snow peas, that is. I planted a lot of vines this year and our long cool spring blessed me with drifts of sweet snow peas.

Refreshing in salads and a guarantee winner in stir fry…my favorite way to use them along with some shrimp and water chestnuts…sweet snow peas are quite versatile. It’s kind of hot to have ramen for a summer’s night dinner, but lightly blanched and served on top of the noodles, its sweetness pairs well with the saltiness of the broth, too.

But we’re all about bites, so I wanted to do some kind of appetizer with it. Shrimp is such a great partner for snow peas, so I think you’ll like my Pea Wrapped Shrimp with Miso Drizzle. I’ve got a lot of great flavors playing off each other. The sweetness of the snow peas and sweet succulent flavor of the chilled shrimp are nicely balanced with the acidity of some lemon juice in the nutty miso paste. Kind of an Asian fusion dish.

Note: Miso has a strong flavor, but if you want more than a drizzle, you can make a little more and serve it on the side as shown in the picture here.

One thing you might notice in the picture is that my shrimp is straight. Shrimp naturally curls into a round when you cook it. But, you don’t want that because you wouldn’t be able to wrap a snow pea around it. The trick? Use a toothpick inserted into the raw shrimp before boiling it. Then pull the toothpick out while it’s cooling down. Straight shrimp!

In a couple of weeks, I’m going to a friend’s barbecue and she asked me to bring an appie. I might have to take this one, especially because it’s so easy, looks so pretty, and I can make it way ahead of time and fridge it.

So, while snow peas are around in the market, take advantage of this delightful veggie. 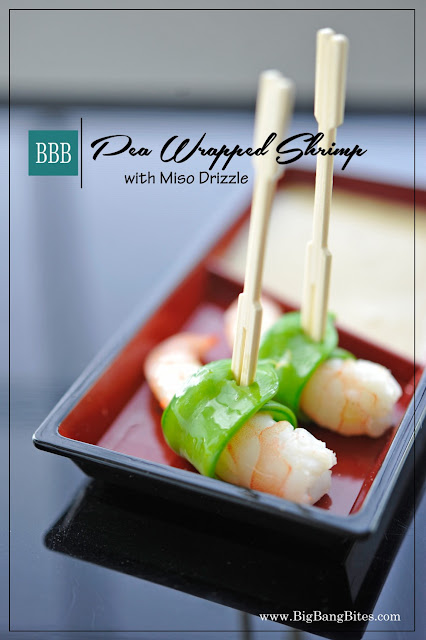 Insert toothpicks into the raw shrimp lengthwise, leaving the ends showing, so you can pull them out later. Bring water to a boil in a saucepan and add shrimp. Cook just until the shrimp turn pink, a couple of minutes. Drain and set aside. When the shrimp is cool enough to handle, remove the toothpicks.

Note: It’s harder to pull out the toothpicks when the shrimp becomes cold.

Bring water to a boil in a saucepan and add the snow peas. Blanch for only a minute. You want them crunchy, not cooked. Drain and immerse the peas in cold water to stop the cooking.

Wrap a snow pea around each shrimp, secure with a toothpick or fancy pick and line them up on your server. Chill in fridge.

Combine the white miso, lemon juice, sugar and mayo. Drizzle over the shrimp when ready to serve. You can garnish with black sesame seeds for some contrast and nutty flavor. 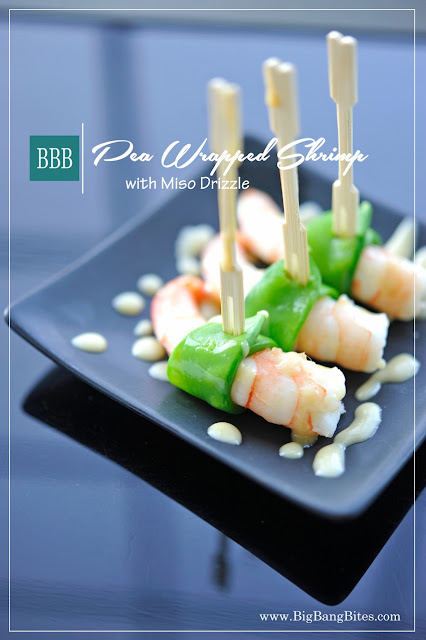