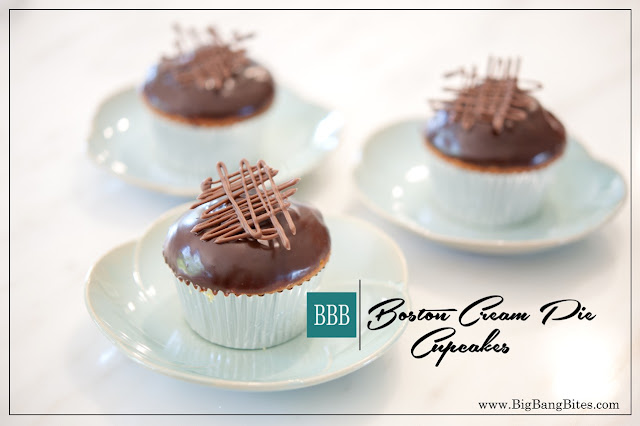 Boston Cream Pie has to be up there with Apple Pie, German Chocolate Cake, and all the old classics. It never disappoints. It’s decadent, refreshing, and comforting.

I wanted to try making chocolate eclairs…Kerry’s favorite. So, I made a glistening ganache for the icing. But since it was the first time I’ve ever made it, I made too much. Had to think of something to make to use up the leftover, so I wouldn’t eat it every time I visited the fridge.

Well, having just made eclairs…which have vanilla custard filling…and having too much the ganache, Boston Cream Pie came to mind. It’s a dessert that easily transfers to cupcakes, so I made these Boston Cream Pie Cupcakes.

I always wondered why it’s called Boston Cream Pie when it’s really a cake. So, I looked it up. Lesson for today…in the old days, the same pan was used for pies and cakes. So, the word pie and cake were used interchangeably also. Eventually cakes were called cakes, and pies were called pies. But the Boston Cream Pie was already history, so it’s name didn’t change.

Anyway, for the cupcakes, I just jiggled some chocolate on wax paper, so I’d have some kind of decoration. Otherwise, it would look quite plain. When Hunter, my 4-year-old grandson, saw the cupcakes, he said he wanted to eat the chocolate “bridge.” Hmmm, okay…good description. You can use your imagination and create any kind of decoration if you want, but if you like the “bridge,” go for it. 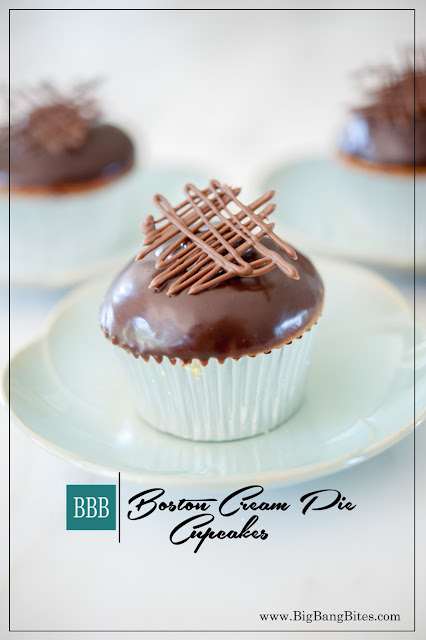 Make the custard. Put the sugar, salt, and cornstarch in a pot. Stir to combine. Add the milk to the beaten egg and gradually stir into the sugar mixture. Cook on medium heat, stirring constantly until it comes to a boil and custard thickens. Continue to boil for one minute.  Remove from heat and add the vanilla. Stir and set aside to cool. If you put it in the fridge, place a clear wrap on the surface, so a skin won’t form.

Make the ganache. Heat the heavy cream just to a boil. Remove from heat and add the chocolate. Stir, then whisk until smooth. Set aside to cool. Do not refrigerate, as ganache turns dull and you want it to be shiny and fluid.

Make the decoration. Melt the chocolate. Place into a small zip lock sandwich or snack bag. Snip the corner. Drizzle chocolate back and forth onto wax paper. This can be placed in fridge to harden.

Make the cupcakes according to package directions, but substitute the same amount of melted butter for the oil.

When cupcakes are cool, use an apple corer and poke out the center, saving the plug of cake. Fill the opening with custard. Cover the hole with the plug, which you might have to make shorten. The plug can be level with the top of the cupcake, or for mine, I left it a bit raised to support the decoration. Dip the tops of the cupcakes into the ganache or spread with butter knife.

I dipped my cupcakes and the plugs often fell out. I just spooned it out of the ganache, put it back on, and tapped the cupcake on the table so the ganache leveled out. The decoration will hide any flaws. 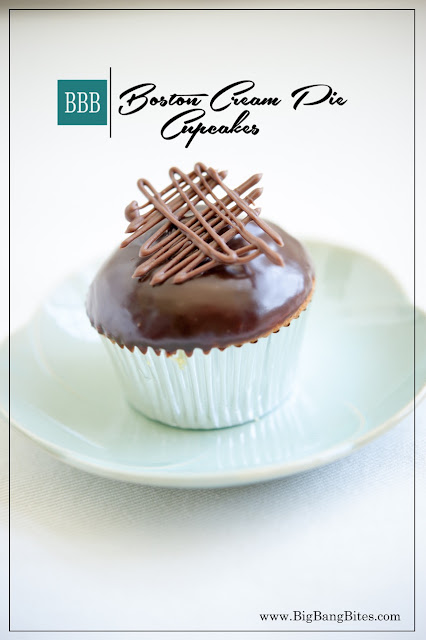