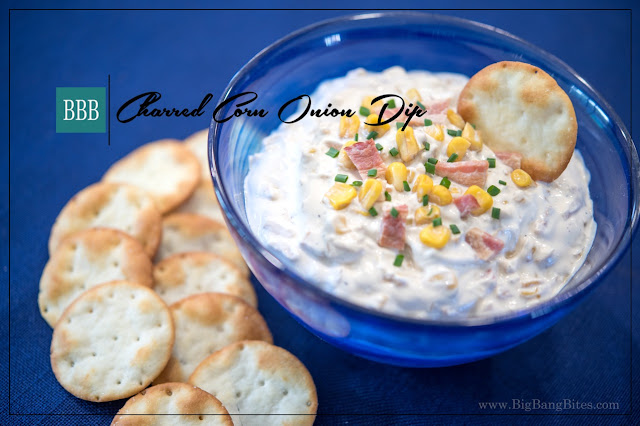 Throw Back Thursday is the perfect time for bringing back the classic sour cream onion dip. I'm sure the young folks today aren't familiar with this simple old fashioned dip made with a tub of sour cream and a package of onion soup.

But if you spent your younger days in the 60's and 70's, this was probably your go to dip. And for really fancy events, there was the clam dip. In college, I remember making sour cream onion dip, not only because it was the trend, but because it was so easy! Open the carton of sour cream, pour a package of onion soup into it. Stir and serve with chips. You didn't even need a bowl.

I can't remember the last time I had sour cream onion dip, but one day it popped into my head and I thought, hey, why not bring it back. But I wondered how to ramp it up. With summer corn being so cheap and abundant now, and I love charred corn, I thought it would be a great combo.

I used yellow corn because of the color; it stands out against the bland color of the dip. Then I heard echoes of "bacon, bacon" from the peanut gallery, so I added that. It is a bit salty, so I served it with plain crackers. Pita chips would be good too. So, Throw Back Thursday, here's some jazzy sour cream onion dip with a new  happy face. 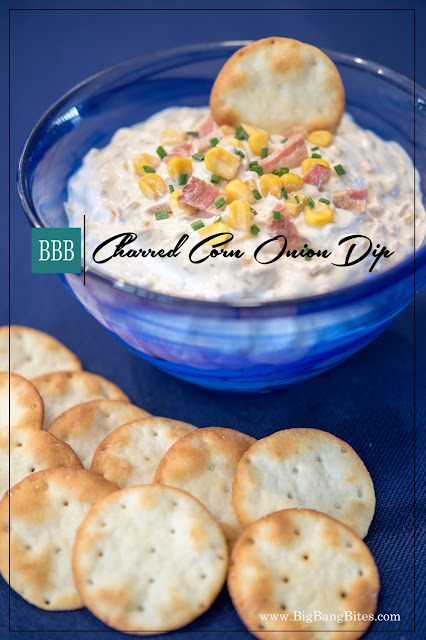 Char the corn on a grill. Cut off the kernels and place in a bowl.

Cook bacon in microwave until crisp. Chop into bits. Add to the bowl of corn.

Add the sour cream and onion soup. Stir until well combined. Refrigerate for about 2 hours, so the ingredients can meld.