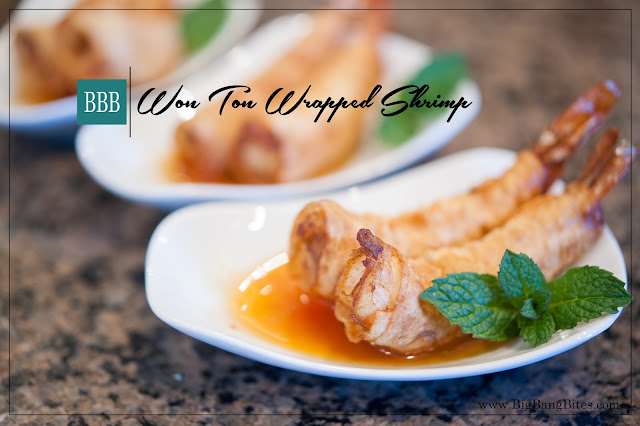 My sister sent me a gift of a case of gourmet Texas ruby grapefruits. They were huge…like small cantaloupes…with juicy red flesh. Kerry can’t have grapefruit in his diet, so I had the whole case to myself. They were delicious with my breakfast or snack, but it was also a lot of grapefruits for one person.

I remember going somewhere and having crab cakes served with some kind of grapefruit sauce. It was tangy and bright and great with the crab. I don’t know what was in it, but that gave me the idea to make a dipping sauce using my grapefruits. But then what would I serve with it?  I didn’t want to be a copy cat and serve it with crab cakes.

Lindsay suggested egg rolls, but I thought they were kind of huge for a Big Bang Bite. So, keeping with the crispy won ton shell idea, I thought “small” and came up with shrimp. Get it? Small, shrimpy? Okay, Lindsay didn’t like my joke either. But aside from that, shrimp always goes well with sweet and sour.

Although Won Ton Wrapped Shrimp isn’t served at restaurants…at least I’ve never had it, you might have seen it in cookbooks or online. But I like to think my grapefruit sauce is an original twist to this tasty appetizer. I have to point out a really important fact about the sauce.  When I was playing around with it, I also experimented with regular yellow grapefruits and it DID NOT taste the same. The red flesh grapefruit was way better. It wasn’t bitter like the yellow grapefruit and it was less acidic. So please use the Texas ruby grapefruit, or some kind of red flesh variety. 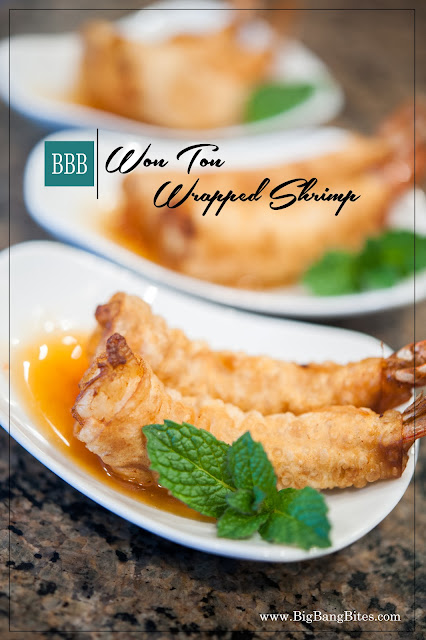 Clean and devein shrimp. You can remove the tail shell completely, or leave it on as pictured. Pat dry and place in bowl. Add soy sauce and allow it to sit at room temperature for 20 minutes.

Drain the shrimp and pat dry. Roll and wrap each shrimp in the won ton wraps, sealing the edge with a dab of water. You can put a little slit in the middle of the shrimp to make it lay straight. All 24 can be made at once. Fill frying pan with at least one half inch of oil. Over medium heat, fry until golden. Drain on paper towel. Serve with dipping sauce on the side.