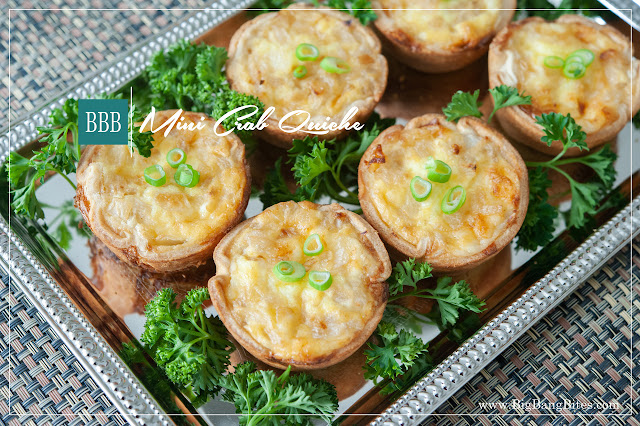 Rich and creamy mini quiche in a flaky crust and  loaded with fresh crab.

Last week I posted a Cold Crab Mini Tostada and I wanted to continue on my crab binge, so I bought more crab. This time I wanted something hot, so quiche came to mind. And it’s one of the easiest things to make, whether you make it in a pie pan, or in a muffin tin.

No matter what you put in your quiche, you’ll never go wrong if you use the basic ratio of heavy cream to eggs. It never fails and works every time. It’s one egg to one half cup of cream. Just keep doubling it according to how much you need. I’ve seen some recipes that use cream, but I like heavy cream for its rich and creamy texture.

I usually make a vegetarian quiche for the family, sometimes with a crust, sometimes without. For these mini quiches, I wanted a crust, so for the first time in my life I used a ready made crust. Holy cow! I was really surprised that it was pretty good! I always watch cooking shows and people say, make life easy, use store bought crust when you’re in a hurry. I kind of didn’t believe it because well, home made is mmmm home made. But yup, from now on when I’m making appies for a party, ready made crust it is. Makes life easy! 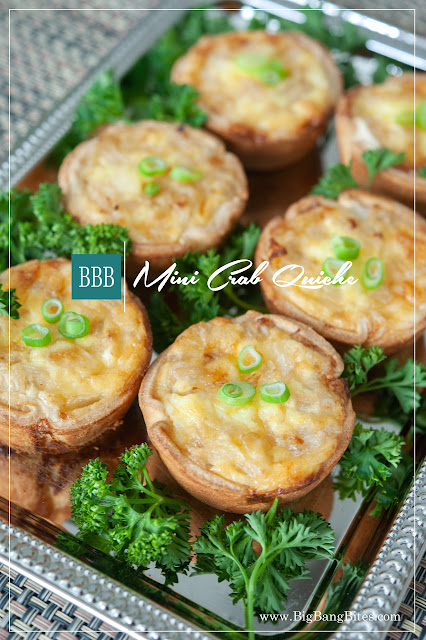 Cook the onion in the butter until tender, about four to five minutes. Set aside.

Lightly coat the muffin tin with cooking spray. Cut the pie crust into three and a half inch circles and tuck into tin.

Divide the crab among the dozen cups. Add the two cheeses on top of the crab.

Beat the 2 eggs in bowl. Add the cream, onions, and salt. Beat until combined. Pour into each quiche. Bake at 400 degrees for 8 or 9 minutes. Then lower temperature to 350 degrees and bake for 12 minutes. Test with a knife. It should come out clean when done. Serve warm.