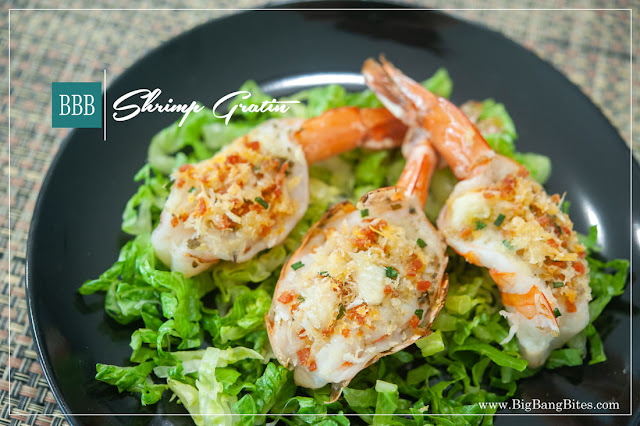 ​It’s been a pretty hot summer in northern California, so chilled white wines and frosty beers are great to cool down with. Or my recent favorite, proseco. And what could be better than a shrimp appetizer to go with that refreshing drink. It’s a great combination.

With this appie, you have to use a large shrimp because it has to hold the stuffing. I used a 13-15 count, so the shrimp is able to maintain kind of a boat shape. It’s the perfect size for this gratin dish and it’s hearty too. You get some filling with each big bite.

Kerry isn’t big on shrimp. He likes shrimp scampi and shrimp tempura. That’s pretty much it.  So, when I had him sample this, I wasn’t expecting fireworks. Surprise, surprise! He had more than one! And he wants me to make it again. I used fontina cheese in the stuffing, but Kerry suggested a more flavorful cheese, so next time I’ll try gruyere. He even suggested swapping out the pepperoni for prosciutto for a different taste. So, I guess this is a winner, since Kerry went from, “me no likey shrimp that much,” to “make it again.”

In our house, whenever I try a new recipe, everyone has to say, “peat for thumbs down or repeat.” This one is definitely a repeat. Hope it becomes one of yours too. 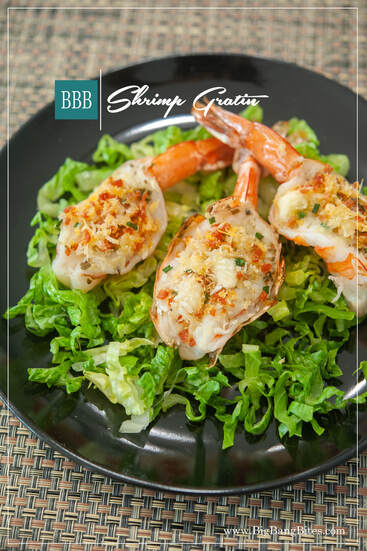 Prepare the shrimp. Very carefully remove the shell, keeping it in one piece AND leaving some of the shell on the tail end. Split the shrimp down the back to flair it open, but do not cut it through to the belly. Place the shrimp back into the shell. This helps the shrimp keep its shape.

Toss the pepperoni, cheese, panko crumbs, and chives in a bowl. Spread the shrimp open into a boat shape. Fill the center with the filling.

Place the shrimp on a cookie sheet covered with parchment and bake at 400 degrees for 5 minutes. Then place under broiler and broil for 2 minutes to brown top. May be served with or without the shell as seen in the photo.