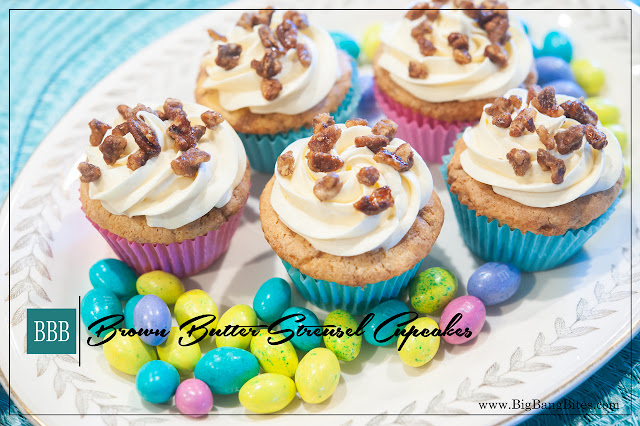 So I was reading about these interesting hacks to improve the taste and texture of cakes made with store bought cake mixes. Use melted butter instead of oil. Replace milk with the water. Add extra eggs or yolks. Use hot water or coffee for chocolate mixes. Add a splash of vanilla. All quite interesting, although I have yet to try any of them.

My sister gave me a recipe for chocolate chip cookies that calls for browned butter instead of just regular butter and it really changes the flavor. It gives it a bit of a toffee flavor and a richer taste. So thinking about all those other hacks, I wondered how subbing browned butter for regular butter would change the taste of a boxed cake mix.

I got a free cake mix from my local grocer because it was my birthday, so I thought I’d give it a try. I haven’t heard or read about this substitution and I decided not to google it, so I could feel like I thought of something original by myself. Maybe not, but maybe so.  Anyway, cupcakes were on my mind. And I love a filled cupcake, so I thought a streusel mixed in could add to the hopeful toffee flavor.​

Since this was an experiment that actually turned out to be a success, I didn’t want to make the frosting from scratch in case things didn’t turn out, so I used a new ready made Whipped Butter Cream Frosting by Betty Crocker. I’m really not a frosting person, but I was surprised that this new frosting wasn’t too bad. Nothing like scratch, but good in a pinch…or if you’re just too lazy. Haha. Just remember to always whip canned frosting to make it fluffier, lighter, and almost double in volume. 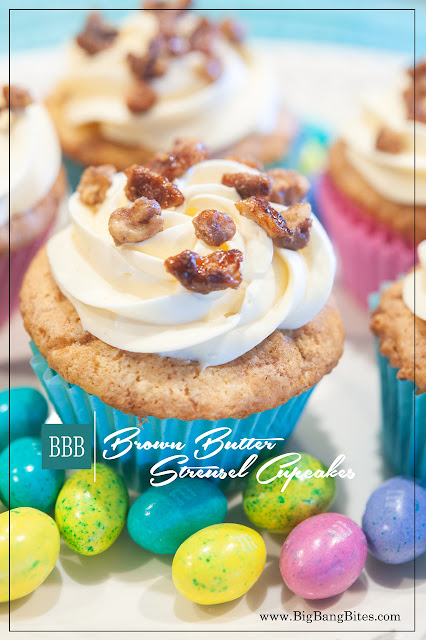 For the cupcakes, brown the butter in a pan over medium heat.  Stir and watch carefully until a golden brown. Bits of brown will settle on the bottom. Remove from heat and cool. Prepare the cake batter per directions and add the browned butter. Set aside.

Place all the ingredients of the streusel in a food processor and blend until it holds together in clumps. Break into crumble, pour over cake batter and fold in a few times. Do not mix to blend. You want ripples. Spoon into cupcake liners and bake at 350 degrees for about 16 to 19 minutes. Check with toothpick at 16 minutes.

Meanwhile, put the pecans in a small pan with the brown sugar, cinnamon, salt and a teaspoon of water. Caramelize over medium to low heat, stirring constantly. Burns easily, so once it coats the nuts and looks shiny, pour out onto parchment paper. When cool, break into pieces.

Whip the canned frosting until light and fluffy. Frost cupcakes and sprinkle with nuts. 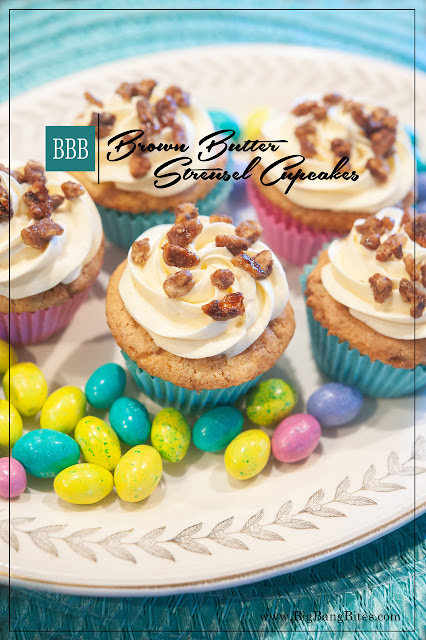