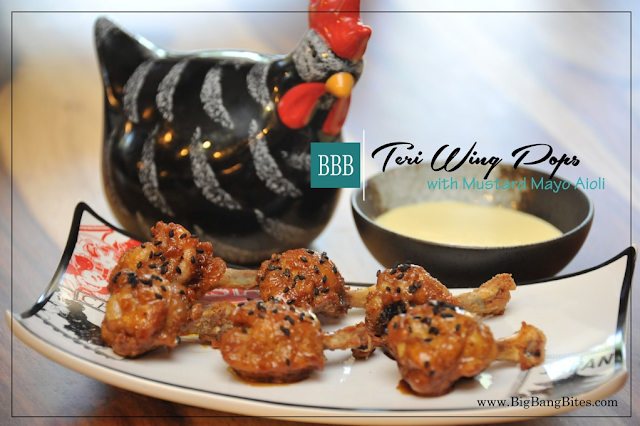 My mom always made these wing pops for parties as far back as I can remember. I hate to date myself, but I mean decades ago! She’d make a mountain of them because everybody loved these tender bites. Today, these chicken wings turned into lollipops are seen on so many food sites and blogs, but I thought I’d share my version of it, which is a little different than Mom’s. I serve my wing pops with a mustard and mayo aioli, which is a common condiment at fast food restaurants in Hawaii. We grew up putting it on our french fries…yes, you heard right…and teriyaki sandwiches, so I thought it would be great on these Teri Wing Pops with Mustard Mayo Aioli.

Chicken wings are a popular party food, but they’re not the easiest things to eat neatly, especially if you’ve got a wine glass in one hand and a party plate in another. And it’s hard to get all the meat from in between those two little bones without making a mess. Problem solved. These wing pops have all the meat pushed into a lollipop, making them the easiest thing to eat at a party. And your lip gloss will stay in tact. So, if you make these for your next party, you better make a lot of these babies because they’ll go like candy.

Frozen party wings come separated into pieces and ready to turn into wing pops. However, if you have whole wings, you’ll first have to remove and discard the wing tips. Then cut through the joint to separate the “drumstick” from the middle section of the wing.

To make the lollipops, you have to push the meat up to one end of the bone. For the “drumstick” piece, score around the bottom of the bone, just above the cartilage. Then push up the meat to make a ball on the other end. You might have to use a small knife to scrape the meat away from the bone. For the middle section of the wing, score around the bone on either end, just above the cartilage. There are two bones in this section, so you’ll have to pull out one of the bones before you push up the meat to make a lollipop. If you have trouble doing this, cut through the cartilage on the end that you scored around the bone. Then twist and pull out the bone. Set aside.

For the sauce, combine all the ingredients in a pot and bring to a boil. Watch the pot!  Soy sauce and sugar gets very bubbly and can boil over. Lower the heat and boil for about 15 minutes. The sauce should coat the back of a spoon. Set aside.

Dredge the wing pops in flour. Heat the oil in a small skillet because you’ll want to fry about six to eight of them at a time until golden brown. Remove and drain on a paper towel. The reason for frying small batches is because the hot wings absorb the sauce better. As soon as you’ve put more wings in the skillet, dip the hot fried wings in the teriyaki sauce to coat the lollipop end only. Plate them and sprinkle with black seeds.

To make the aioli, combine the mustard, mayo, and water. Serve along with the wing pops for dipping.