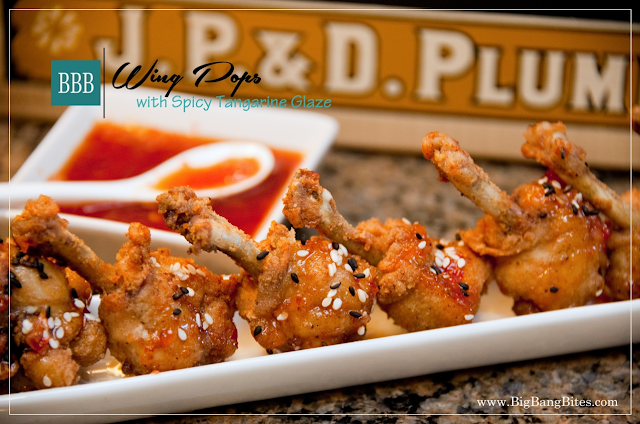 Fried chicken wings shaped into lollipops and drizzled with a sweet and spicy tangerine glaze.

When you visit our site, the first thing you see is our header with a picture of my Wing Pops with Spicy Tangerine Glaze. Yet, I’ve never posted it!

People are beginning to ask, “When are you going to post that recipe?” Well, every time I’ve tried to, I’ve lost the recipe for the glaze. It’s like it doesn’t want to be published. The first time I made the dish and photographed it, I was really excited and wanted it to be one of my first posts, but I couldn’t remember where I put the recipe. Since then, I’ve re-made the recipe for the glaze four times. The key word being re-made because I could never remember what I wrote down. All my post menopausal girlfriends will understand this frustration.

Anyway, this week was my fourth attempt. I actually made the glaze a little differently and I have to say, I liked it the best. Not too sweet, not too tart, not too spicy. But apparently, things were still on the downhill roll because guess what? I lost the recipe again! I couldn’t sleep that night because I was convinced I threw it out with the trash, so my husband got out of bed to dig out the garbage from the trash compactor. Gross. I sifted through the muck to no avail. An intuitive once told me I have a “searching hand.” So I said, “Searching hand, get to work!” Well, don't ask me how it got there, but I found it in my purse, so here it is. Finally!

Making the wing pops is exactly like my other recipe for Teri Wing Pops with Mustard Mayo Aioli, except this one has a sweet and spicy glaze drizzled on the wings. Right now, tangerines are in season, so it’s a great time to try this. I do have to mention that because of the different varieties available, the glaze will taste a little different depending on which tangerine you use. This week, I made two glazes, one with fresh-squeezed sweet honey tangerines and one with Trader Joe’s 100% Tangerine Juice, which was a bit more tart. Both were good, but as you can probably guess, the glaze made with Trader Joe’s juice was tangier. So, keep that in mind when you choose what kind of tangerine juice to use.

Frozen party wings come separated into pieces and ready to turn into wing pops. However, if you have whole wings, you’ll first have to remove and discard the wing tips. Then cut through the joint to separate the “drumstick” from the middle section of the wing.

To make the lollipops, you have to push the meat up to one end of the bone. For the “drumstick” piece, score around the bottom of the bone, just above the cartilage. Then push up the meat to make a ball on the other end. You might have to use a small knife to scrape the meat away from the bone. For the middle section of the wing, score around the bone on either end, just above the cartilage. There are two bones in this section, so you’ll have to pull out one of the bones before you push up the meat to make a lollipop. If you have trouble doing this, cut through the cartilage on the end that you scored around the bone. Then twist and pull out the bone. Set aside.

For the sauce, combine all the ingredients in a pot, except for the cornstarch and bring to a boil. Continue to boil on medium to high heat for about 12 minutes. Mix the cornstarch with a teaspoon of water and add to the glaze to thicken. Remove from heat and set aside.

Lightly salt and pepper the wing pops and dredge in flour. Heat the oil and fry until golden brown. Plate them. Reheat the glaze and drizzle on to the wing pops. Sprinkle with black and white sesame seeds.