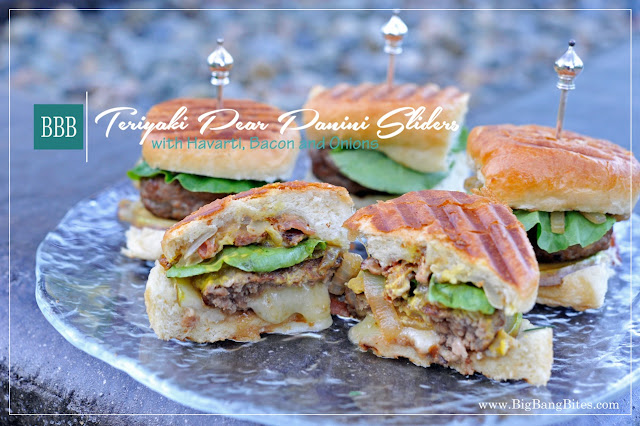 Sweet and savory panini sliders made with teriyaki turkey patties bursting with Havarti cheese and accompanied with a slice of crisp pear, caramelized onions, bacon and lettuce.

Bacon, bacon, bacon. Seems like everyone loves bacon, including my family, so they’ve been bugging me to make something fun with it. My feeling about bacon? Meh. But the good mother that I am, I compromised and made something where it isn’t the star, but a supporting ingredient.

To me, bacon is just so salty, so I thought I’d pair it with something sweet like teriyaki. Burgers need cheese, so I put a chunk of creamy Havarti inside the patty. When you do a panini and put the cheese on top of the patty, it melts and oozes out when it gets squashed in the panini press. So, if it’s hidden inside the patty, it stays there until you take a bite.

Cheese is salty, so I added a sweet slice of green, as in not ripe, green colored pear. You can use any colored not ripe pear, but green looks nice. Then came the bacon, which is salty, so I caramelized sweet onions to offset that. I finished it with a bit of mayo and mustard, and all this sweet and savory business turned out a winner. But open wide because these sliders are tall!

With the warm summer weather upon us, my Teriyaki Pear Panini Sliders will be perfect with some cold white wine. Scrummy! 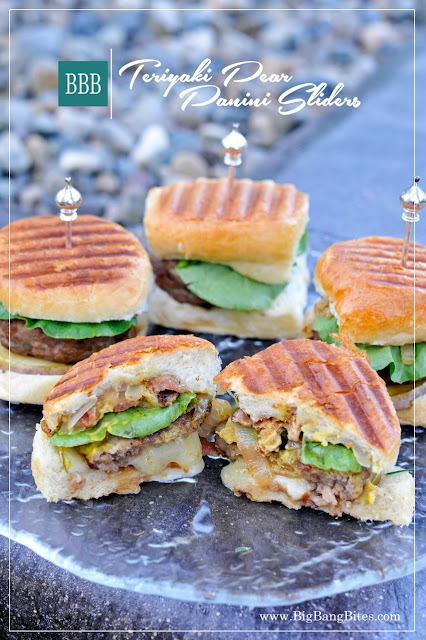 Combine the soy sauce and sugar until dissolved. Add to the ground turkey. Use your hands to mix. It will be sticky. Set aside so meat marinates a bit.

Cook bacon in a frying pan until soft crisp. Remove with slotted spoon and place on paper towel to drain. Take out all but two tablespoons of the bacon oil from the pan. Cut the onions in half, then slice. Add the onions to the bacon oil and cook on medium to medium-high heat for about 10 minutes until brown and caramelized. Add the bacon and set aside.

Cut the cheese into twelve pieces about an inch square and a little less than a half-inch thick. Using about a quarter cup of the meat, make the patties and put a piece of cheese in the center. Be sure to cover the cheese completely with meat, so when you fry them, it doesn’t leak. Fry patties in some oil until brown. Because the cheese is in the center, they cook in a few minutes.

Slice the pears from the large end into one-fourth inch pieces. Take out any seeds. Save the skinny top end of the pear for snacking.

Assemble the sliders. Cut the rolls in half. Place the pear on the bottom of the bun with a spoonful of the onion-bacon mixture on top. Put the patty on next and the bun cover. Press in the panini maker. Before serving, add the lettuce, mayo and mustard.