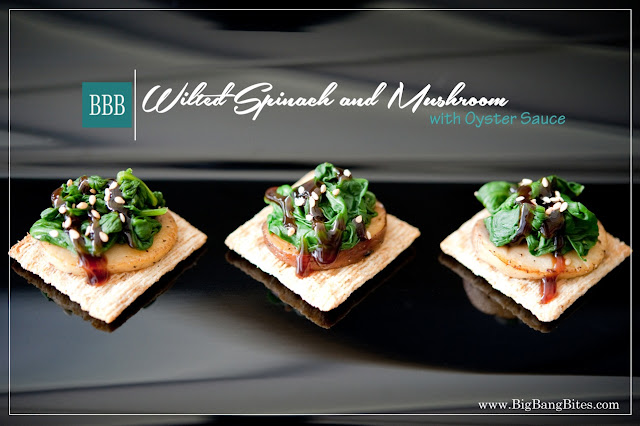 Garlic infused sautéed mushroom on a Triscuit and topped with a bed of wilted spinach drizzled with oyster sauce.

Last week ended the third challenge in the Triscuit Summer Snackoff Contest hosted by Martha Stewart and Triscuit. You had to use summer greens with at least one other ingredient. I chose spinach because I didn’t want to use it raw. I knew if it were cooked or wilted, more spinach could be used atop the little cracker. That way, the summer greens could really be the star of the entry.

So, I drew from my own eating experience. Whenever we go to a Chinese restaurant, I must have gai lan drizzled with oyster sauce. Gai lan is also known as Chinese broccoli. The stalks are thinner, they’re tender and sweeter than regular broccoli, and the tops often have flower buds. Growing up, we enjoyed wilted spinach with splashes of soy sauce and peppered with roasted sesame seeds. I married the two ideas and created my Wilted Spinach and Mushroom with Oyster Sauce.

I had my critics…critics being my two daughters…taste it because I can always trust them to be brutally honest. Lindsay said, "yum." Sunny said, "yum, but too salty." Oyster sauce is salty, so I swapped the regular Triscuit to the Triscuit with a Hint of Salt. I then watered down the oyster sauce with a bit of water and gave the option of adding a pinch of sugar, which cuts back the saltiness. Sunny said it was a “go.” So, here is my entry. I hope you’ll like it. I hope the judges love it! 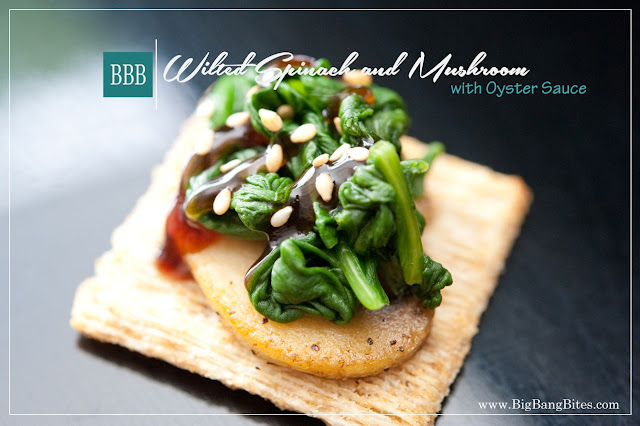 Pick off all the leaves of the spinach. Fill a deep skillet with water and heat. When it begins to boil, remove from stove. Push the spinach into the hot water. Immediately flip the whole bunch of leaves over. As soon as it wilts…this will be within seconds…remove them to a colander and run under cold water to halt the cooking. Use your hands and squeeze all the water out of it. Place on a dishtowel and squeeze again to remove more water. Using your fingers, fluff open the leaves and set aside.

Saute the mushrooms and garlic with the olive oil in a small pan. Cook for a couple of minutes and remove. Discard garlic.

Place a mushroom on a Triscuit. For the smaller pieces, you might use two. Mound some spinach on the mushroom.

Combine the oyster sauce and water. Add the optional sugar, if desired. (I like it both ways)  Put it in a zip lock sandwich bag and cut off a small corner. You don’t want a lot coming out.  Drizzle two thin lines over the spinach. Oyster sauce is salty, so you don’t need a lot. Sprinkle with roasted sesame seeds. 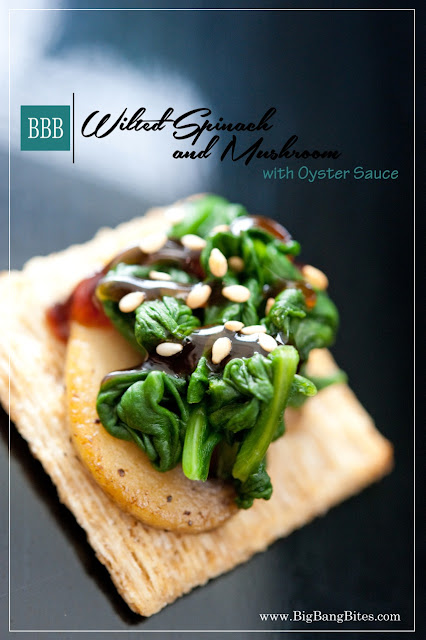