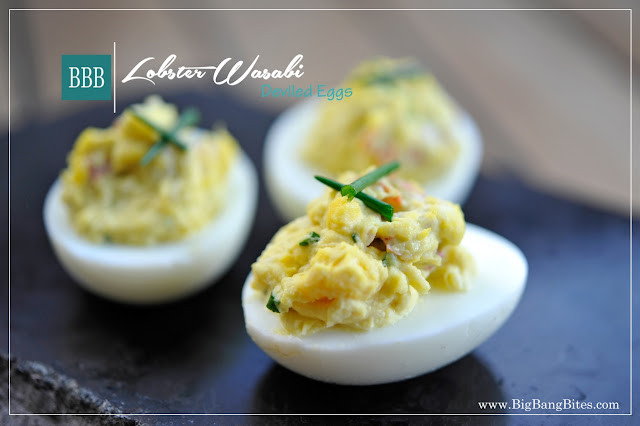 Deviled eggs spiked with wasabi and filled with chunks of sweet lobster.

I always buy organic eggs and every so often, Costco sells them for half the price of what I pay at the grocery store. So, when I saw them there, I had to buy them. What is it about a good deal that we can’t resist? I remember my great aunt called us over to her house one day because she had a ton of pears to give us. She said, “They were only a nickel a pound, so I bought 50 pounds!”

And that’s what happens when you can’t resist. Now, as you all know, when you buy stuff at Costco, it’s in gigantic portions. So yes, I came home with a tray of eggs that was more than Kerry and I could handle eating by ourselves. I had to start baking and finding ways to use them.

My grocer always has $5 Days where certain things are sold for five dollars. Taking advantage of that, I bought a small lobster tail for five dollars and thought I’d make some fancy deviled eggs. I’ve often seen wasabi deviled eggs, so why not combine two things I love and use up my eggs?

I didn’t know if the wasabi would overpower the sweetness of the lobster, and I didn't want that, so I added the wasabi a little at a time until I found the right amount of warmth when you savor the flavors. I also kept the lobster in chunks big enough, so you could chew and really taste its sweetness. 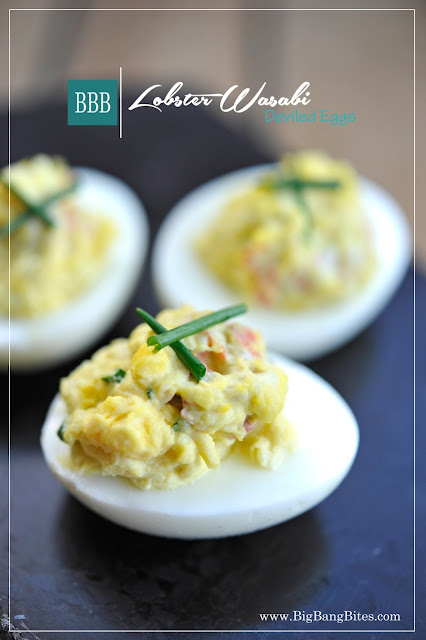 Snip open the top of the lobster shell length-wise. Place the lobster tail in boiling water and cook 1 minute per ounce. Remove and let cool.

Cut the hardboiled eggs in half and remove the yolks. Place yolks in a bowl and mash with a fork. Add the mayo, wasabi paste and chives. Blend well. Add salt to taste.

Remove the meat from the lobster shell and chop into about half-inch chunks. You want to be able to taste the lobster. Add it to the yolk mixture and gently fold in.

Mound the eggs with the lobster mixture and garnish with a couple of snips of chives, if desired. Cover and keep refrigerated until serving time.