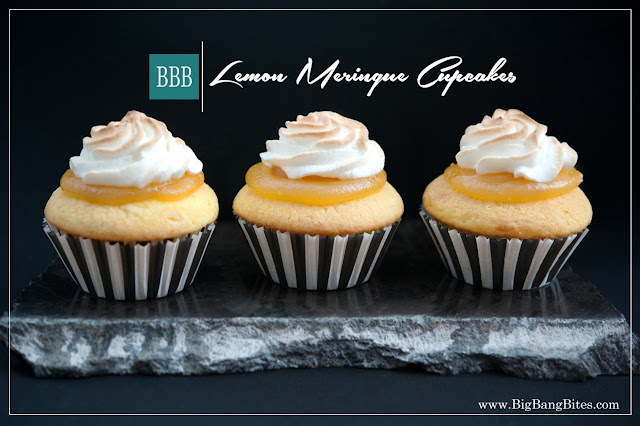 I’m not a jealous person, but I have to admit I’m jealous of my friend’s prolific lemon tree because I love lemons. I tried growing my own tree, but it met its demise with our cold winters and heavy frost. My friend only lives minutes from me, but for some odd reason, her yard is in a warm pocket and she doesn’t get frost. Go figure. Luckily, she gives me pounds of lemons because her tree becomes so loaded with fruit, she just wants to get rid of them. Like they say, one man’s junk is another man’s treasure. Yay for me!  I have bags of gold!

Of course, besides admiring my beautiful bowl of sunshine, it got me into the mood to make fresh lemonade and a lemon pie for my family. And with my bounty of lemons, I thought I should make something for Big Bang Bites, too. This Lemon Meringue Cupcake is very lemony. I used a box mix, but added some lemon zest. I also find box cake mixes make very light cakes, which is nice, but I wanted a denser cupcake because of the topping, so I added sour cream and decreased the water.

And yes, you caught me. Because I cheated on this recipe and used a box mix and a store bought jar of lemon curd, I plan to make another lemony dish this week from scratch, since I still have around ten pounds of lemons left. Pucker power! 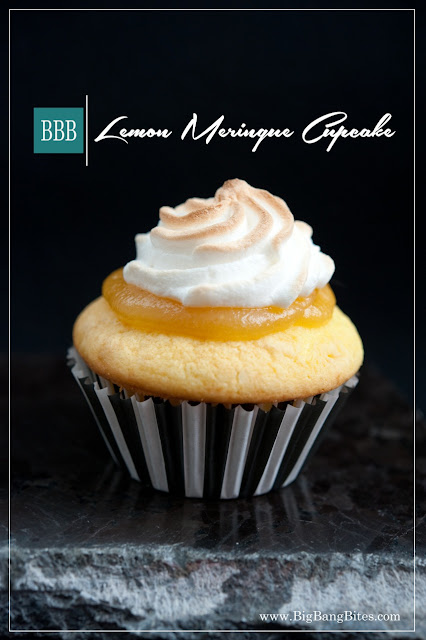 Combine the cake mix with the eggs, oil, sour cream and water. Mix on low speed until just blended, then mix on medium speed for minutes.

For this recipe, I filled 18 cupcakes papers to about three fourths full. For 24 smaller cupcakes, fill cupcake papers about two thirds full. Bake at 350 degrees for 18 to 20 minutes, or when a toothpick comes out dry. Cool cupcakes completely.

For the meringue, beat the egg whites with the vanilla and cream of tartar until soft peaks form. Then gradually add the sugar, one tablespoon at a time. Beat until stiff peaks form.