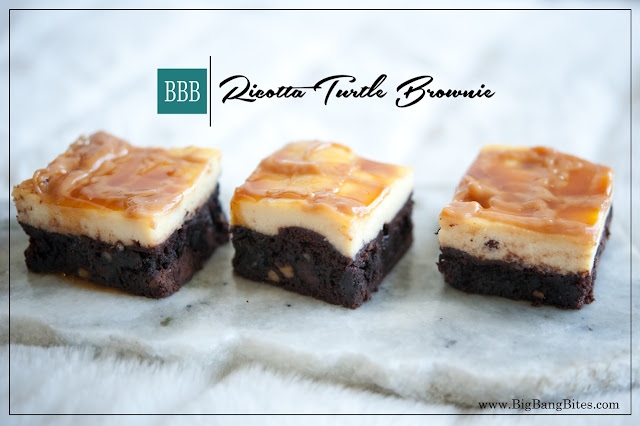 Chocolate chip brownies with a creamy ricotta cheese layer and drizzled with caramel.

I’ve been spring cleaning and I found a box full of recipe tear outs from magazines. Some of them were from 2003! It’s like an obsession. I also found some hand written recipes from who knows where, and some cookbooks that were gifts from my mother-in-law.

Okay. Funny story. Ever since my mother-in-law realized I liked to cook, she’d give me cookbooks galore. One Christmas, she gave me nine cookbooks! That was the thing about her. If she knew you liked something, she’d go overboard and you’d be flooded with your favorite things. She noticed I like cows, so yup, you guessed it. I now have a bajillion cows.  Once she kept giving me this particular magazine and I couldn’t figure out why. Kerry said, “Don’t you remember? You were reading it at her house one day and mentioned it was a pretty good magazine.” Aha! So, the joke around Kerry’s house was that you had to be careful what you said you liked, even if you were just saying it to be polite because it would be a light bulb moment for Mom, bless her heart.

So, when Lindsay was little, she said, “Maybe we should say we like money!” Out of the mouths of babes.

Anyway, thumbing through one the books, I stumbled on an interesting cake recipe from the Go For Broke 20th Anniversary Veterans’ Cookbook. It used a box mix, but a layer of ricotta was poured over it. I thought I’d take that layer and put it on a brownie instead. I had a turtle brownie mx in the cupboard, so that was even better.

The ricotta layer is somewhat like cheesecake, but much lighter and not as sweet, so the caramel drizzle on top gave it another stratum of flavor. I also added chocolate chips to the brownies to make it deathly rich. When you take a bite of all three layers, it’s a heavenly party in your mouth. Scrummy! 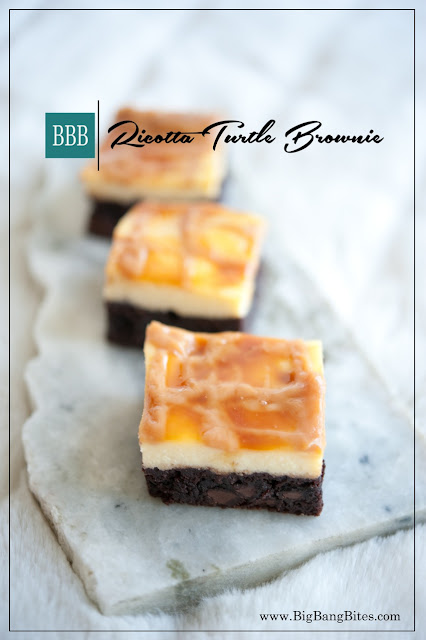 Grease an 8 X 8 pan. Prepare the brownie mix per box directions, add the chocolate chips, and pour into pan.

Mix together the ricotta cheese, sugar, and eggs. Whisk until blended. Carefully pour over the brownie batter.

NOTE: The turtle brownie mix comes with a caramel topping that can be drizzled on during the last 10 minutes of baking. The caramel spreads more and becomes more like a layer. Or, you can drizzle it on once it comes out. It’s more like a topping that way