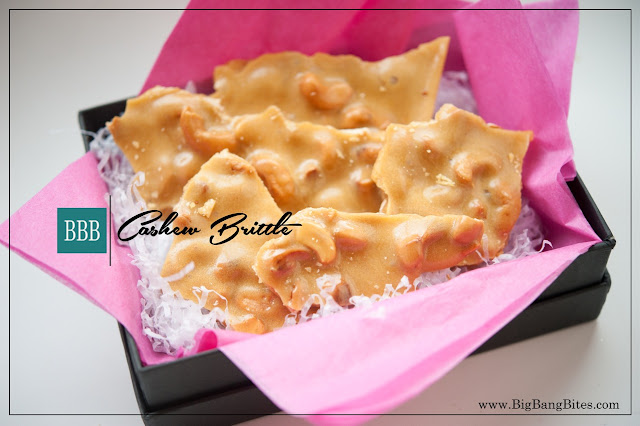 If you just got here, I want to clear up any confusion about this recipe if you’re looking at the large picture above, which doesn’t look like Cashew Brittle with Toffee. The pix above is a basic cashew brittle. The pix below is the same recipe, but with toffee bits added, thus the title, Cashew Brittle with Toffee. Just wanted to let you know because I hate it when I go to a site and the recipe I’m looking for is not there. Anyway, glad you’re here.

There are so many brittle recipes out there in the universe. This I know for sure. Yikes…I’m sounding like Oprah. But it is true.  Some are really simple recipes where you just melt sugar, some have you use the candy thermometer to get the sugar base up to a certain temp, and some have you adding tons of baking soda or even cream.

Growing up in the country on Maui, we made brittle by simply melting sugar in a cast iron frying pan. Living out in the “sticks” as some people would say, we often didn’t even have peanuts to throw into the pan, and we lived too far from the grocers to just make a run for it on a moments notice.

Recently, I had to take peanuts off my diet. I’m really sad about that because I love a PBJ sandwich. And I do love peanut brittle. And of course, once you’re told you can’t have something, you automatically crave it. So, I thought I’d make a cashew brittle to soothe my soul. But I like a brittle that’s on the lighter side of the crunch meter, so I had to play around with this recipe. I think I came up with a happy medium as far as balancing the crunch, airiness, and buttery flavor. The only thing I would change is the amount of cashews. I wanted more nuts, so in the recipe below, I’ve increased the nut factor. And to ameliorate the brittle even more, I dotted it with toffee. Oh, yeah…that made thing dance. This will definitely make my holiday list for giveaways. 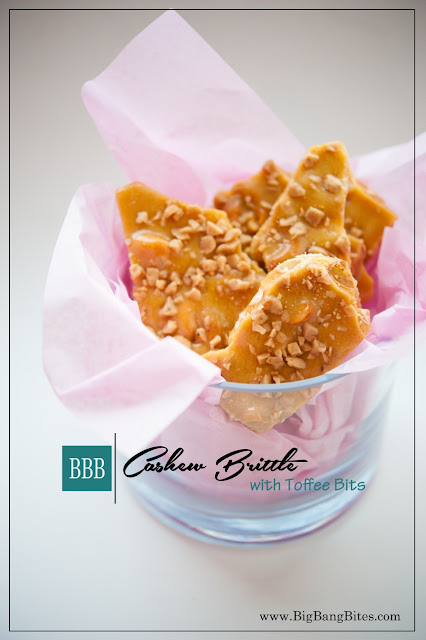 Butter a large cookie sheet. It should be no smaller than 15x10 inches.

Combine the sugar, corn syrup, and water in a large pot. Note: When you add the baking soda later on, it bubbles and rises, so you need a deep pot. On medium high heat, bring the ingredients to a boil, then add butter. Reduce heat to about medium. Cook until candy thermometer reaches 280 degrees.

Add nuts and stir to combine. Remove from heat. Add baking soda and vanilla. Mixture will bubble up like a science class experiment, but just stir it down. Pour onto the butter cookie sheet. Immediately sprinkle the toffee bits all over. Let cool completely. Break into pieces.