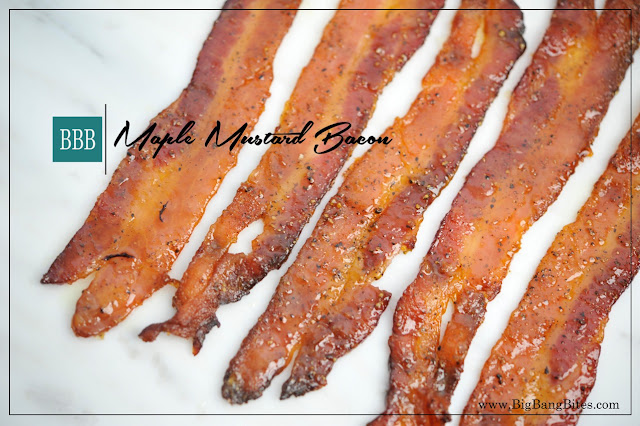 Bacon strips glazed with caramelized maple syrup and mustard, and an added kick of black pepper grounds dancing on top for some heat.

Bacon, bacon, bacon! I think the food police needs to give this meat its own food group because bacon is in everything these days. Main dishes, desserts, breads, even candy.

I was recently at my grocers and the sample lady was passing out chocolate covered bacon. Okay, maybe it’s just me, but I don’t think everything tastes good covered in chocolate. Oddly enough though, bacon was on my shopping list that day because I was making chili. But when I got home, I discovered I already had a pound of bacon!

So, I thought I’d play around with that extra pound. You often see bacon strips caramelized with brown sugar and it’s quite sweet. Maple syrup and regular old yellow mustard is a great combo on salmon, chicken, whatever…so why not bacon? I made a batch and it was pretty good. Salty, sweet, a bit tangy. I thought it needed something extra, so for the second batch, I added some heat with coarse ground black pepper from the pepper mill.

Bingo! These are not like candy bacon. They are sticky and spicy with just enough salt and sweetness. In the photo, I left them whole, but for an appie, I would snip them into three inch pieces and pop them into a bowl or paper cone for finger food. Cute! I guess I should have taken a pix of that too. Thought of it after we ate them all…of course. 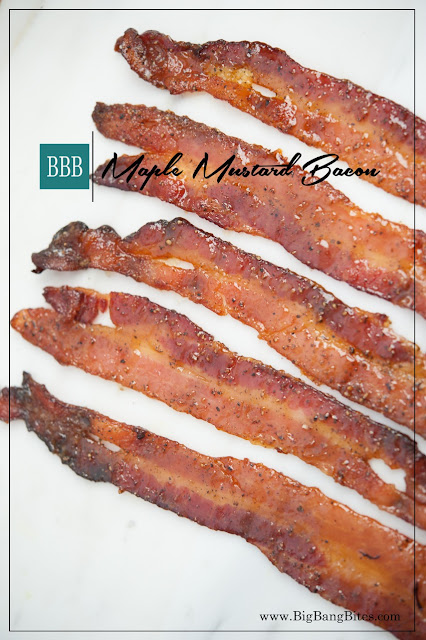 Combine the maple syrup and mustard and set aside.

Use a cookie sheet with sides. Line with foil for easy clean up. Place a cooling rack on top.

Place bacon on rack and brush the syrup on topside only of each strip. Bake at 375 degrees for about 8 minutes. SEE NOTE BELOW.

Turn over the bacon. Brush the topside with remaining syrup. Sprinkle with coarse black pepper. Bake another 8 minutes until bacon is brown and caramelized.

As soon as it’s done, you can sprinkle on more pepper if you want it spicy. Cool on rack for 5 minutes, then remove and completely cool on a plate.

Serve strips whole, or cut into 3-inch pieces for appetizers.

NOTE: I’ve made these in different ovens and the baking time varies a lot. My oven took 16 minutes. A toaster oven will take less time. My daughter’s oven took a total of 24 minutes. I suggest you watch the bacon carefully the first time you make it.