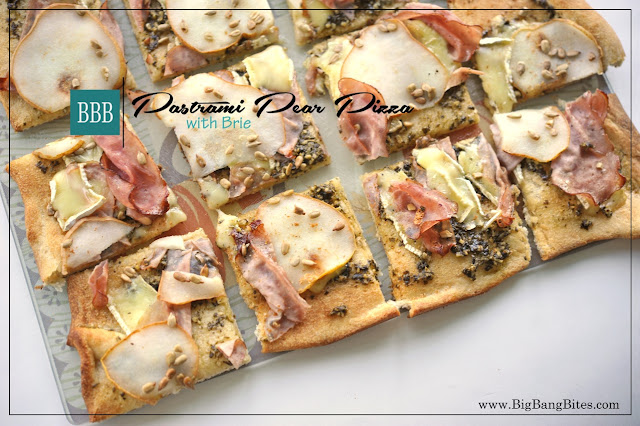 A sweet and salty pizza with paper thin pastrami, slivers of brie, and refreshing slices of ripe pear.

Kerry and I just got back from the most amazing trip to Italy. I wish there was another word for amazing because that would be our food and wine experience there. Yes, we ate and drank our way through the region of Puglia, which is in the heel of southern Italy.

On our food and wine tour, we were treated to the meals that were out of this world. Very different from our American versions. We felt like little piggies eating morning, noon, and night. And of course, we washed everything down with delicious Italian wines from the local wineries.

Lindsay had done summer abroad in Italy during her college years and she said we had to try the pizzas. She said they were different than what we are used to. True. Pizzas were thin crusted, light, and never laden with gobs of cheese and sauce. It wasn’t uncommon to see people eating whole pizzas by themselves because they were so thin and light. One of my favorites? A pizza with white sauce, prosciutto, spinach, a little bit of mozzarella, and dollops of burrata. Heaven. I still had room for an outstanding seafood risotto because the pizza was the appetizer! That’s how light they are.

So, I thought I’d do a pizza that was a little light, too. My sister has a beautiful pear tree, so I helped myself to a basketful of golden gems and created this Pastrami Pear Pizza with Brie. I’m sure it would have tasted ten times better if I had used homemade pizza dough, but I still have jet lag, so I did it the lazy way…bought refrigerator pizza dough.

There’s no heavy sauce, just a bit of pesto and some slivers of brie here and there among the sweet pear slices. I had the deli person cut the pastrami paper thin because I noticed in Italy, the meats on pizzas were very thin and delicate. The sweetness of the pear marries nicely with the saltiness of he pesto and brie. And if you noticed, it’s peppered with bits of sesame seeds. Pour of glass of pinot grigio and enjoy! 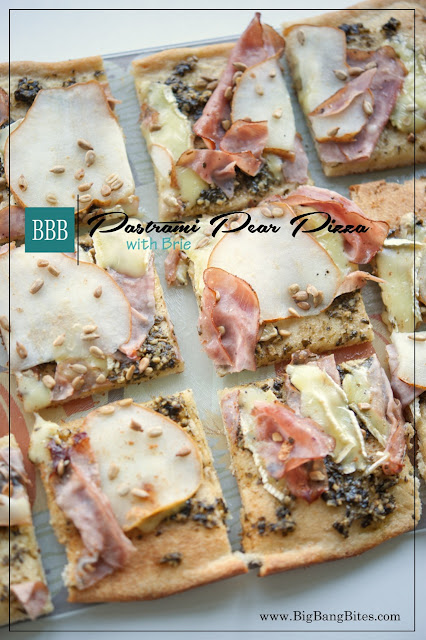 Remove from oven and spread pesto on it. Arrange the pastrami, pear and brie over pesto. Bake another 6 to 10 minutes.

Cut and serve while hot.