Last Friday it was our usual routine to have the twins all day. It was cold and rainy outside, so I thought it was the perfect time to warm up the house with an oven of baked goodies. I had a jar of pumpkin butter that I was going to use during the holidays, but never got around to making anything with it, so that became the star ingredient.

I asked Hunter if he liked pumpkin pie and he said, “Yes, I like good pumpkin pie, Grammy.” Hmmm…did he mean as opposed to bad pumpkin pie? Well, I wasn’t planning to make a pie with a jar of pumpkin butter, so no matter, but I did want to know if he liked the flavor of pumpkin. He did.

Pumpkin butter is a little different than pumpkin puree. The flavor is more concentrated, it’s sweetened, and it has a deep comforting taste. Kind of like the feeling you get when you smear jam onto a piece of warm buttery biscuit. With that in mind, I decided to make a pastry with the pumpkin butter. I thought if I was going to bite into a Danish, what else would I want to taste. Mmmm…sweet cream cheese. And of course, some sweet cinnamon nuts.

Unlike traditional Danish pastries, which are large, I stayed true to my “bites” theme and made these delights bite-size. If you want to go the extra mile, you could make them with a yeast dough. But these are easy and quick, made with buttery puff pastry.

So, did Hunter think this was a GOOD pumpkin Danish? Well, when he saw Sunny eating a piece, he said, “Mommy, if you don’t want the other half, I’ll eat it.”

Well, there it is. 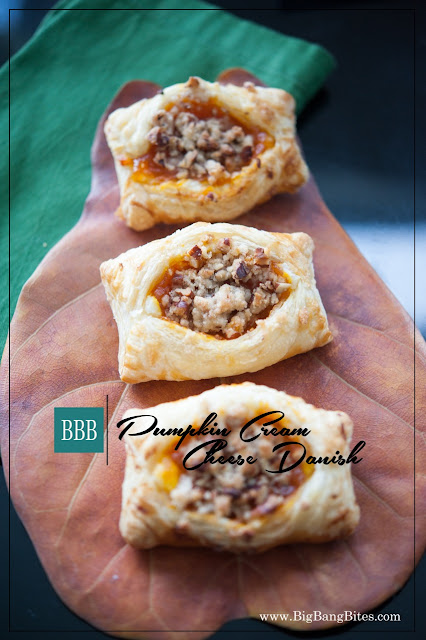 For the streusel, combine the butter and flour in a bowl. Use a pastry blender or your fingers and break it down to a coarse crumble. Add the sugar, cinnamon, and pecans. Toss and set aside.

For the filling, combine the softened cream cheese with the sugar and dash of salt until smooth. Set aside.

Beat the egg and set aside.

Cut the puff pastry sheet into thirds along the creases. Cut each strip into thirds. Roll each piece to about 4 inches long.

Smear some cream cheese down the center, but away from the short edges. Spoon some pumpkin butter over the cheese.  Use your finger and wet the short edges of the pastry. Fold the left and right long edges toward the center to meet, but don’t overlap. Use a fork and press to seal the short edge.

Gently pull apart the slit opening a bit. Sprinkle the opening with the streusel. Bake at 400 degrees for about 15 minutes or until golden.