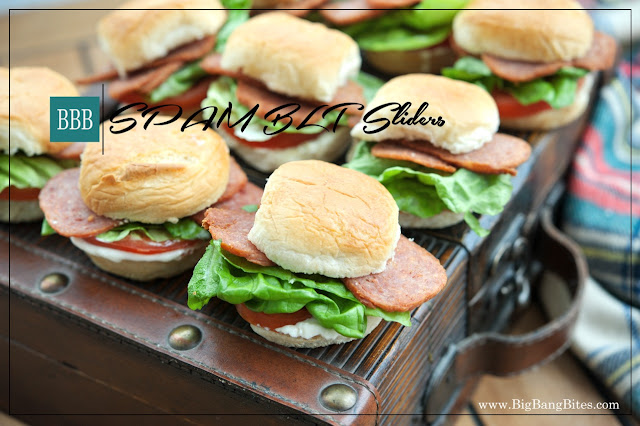 BLT sliders made with crisp SPAM slices instead of bacon.

Anyone who has grown up in Hawaii knows SPAM because we all grew up eating it. History tells us it all began during the war when it became a protein staple. After that, I guess everyone just never gave it up.  In fact, over 7 billion cans of it have been sold since its inception. I always thought Hawaii consumed the most SPAM because you see it everywhere. But then I read an article that Guam actually takes the award for the highest consumption. And it’s just a tiny little island! Amazing.

Growing up, I never knew what SPAM really was, didn’t care, and didn’t question what S-P-A-M stood for. It was just meat in a can. It’s still very popular in the islands, especially when it’s made into SPAM musubi, which is a rice cake with a piece of cooked SPAM on top, and often with a bit of wasabi smeared on it. A strip of nori is wrapped around it to hold it together.

So, what is SPAM? It’s pork shoulder and ham compressed into a block. In Hawaii, besides SPAM musubi, it’s served with eggs for breakfast, it’s in sandwiches, it’s used in stir fry, it’s served on noodles, it can be put in fried rice, and the list goes on. Simply, it’s used like a form of meat.

Lately, Kerry and I have been on a BLT kick. That gave me the idea of making it with SPAM. After all, it’s pork, just like bacon, so why not? I sliced it really thin and fried it semi-crisp because that’s how I like my bacon. I used dinner rolls and stacked it up like a BLT, and voila…SPAM BLT Sliders. The whole family loved it…even my girls who didn’t grow up eating SPAM, but would call it mystery meat.

But there's no mystery here. These were pretty darn good. And less greasy! 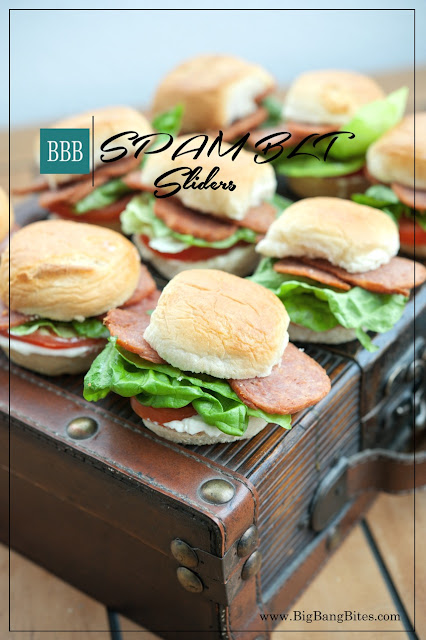 Slice the SPAM very thin…about an eighth of an inch thick. You should get 24 slices from one can. Fry the pieces in a little oil until semi-crisp. Drain on a paper towel.

If you’re using brown and serve dinner rolls, bake them following the package directions. You can also use ready to eat rolls. Cut them in half.

Smear the bottom bun with mayo. Add the tomato slice and lettuce. Top with two slices of SPAM. Finish with bun.