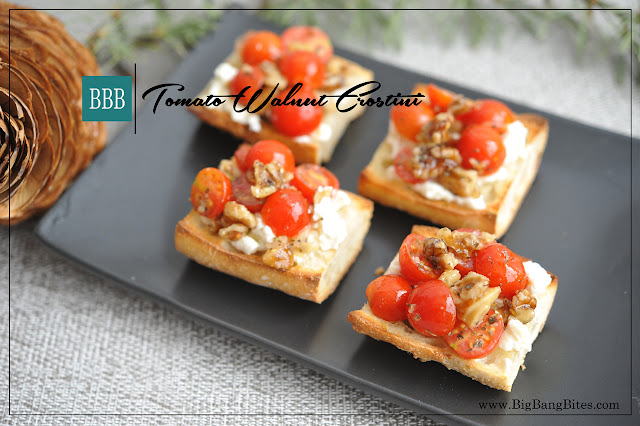 Crunchy crostini smeared with a cream cheese and feta spread, and  garnished with a citrusy walnut and tomato topping.

Pumpkins and holiday décor are around every corner, a sure sign that summer is definitely over.  I’ve been cleaning up the garden, so I can put my beds to bed for the winter. But I still have some die hard plants begging to hang on for awhile, like my red and gold cherry tomatoes. At the end of the season, the little globes are super sweet and the grandkids and pets still enjoy eating them right off the vines.

For their last hurrah, I thought I’d make a crostini using them, and since they’re so sweet, I wanted to balance it with some saltiness and some acidity. One night I made some green beans with walnuts and seasoned it with lemon zest and juice. It was a great combination, so I thought I’d use that idea for my crostini. Nuts go great with veggies, so pairing the walnuts with my tomatoes was a no brainer.

I love a bagel with cream cheese and tomatoes, so I thought cream cheese would be a good base. But I needed some saltiness, so I blended the cream cheese with feta. Personally, I wanted to use goat cheese…my fave…but everyone in my family prefers feta, so I was outnumbered. Most of my friends don’t like goat cheese either…tastes goaty, they say.  Like they’ve eaten a goat before? Actually, I did like the cream cheese-feta combo. I’ll have to use that for my bagels next time.

One tip I have for you about the walnuts is to gently smash them. It brings out the flavor as it releases some of its oils. Kind of like when a recipe tells you to roast nuts like almonds or sesame seeds in a pan before using them because the flavors become enhanced. 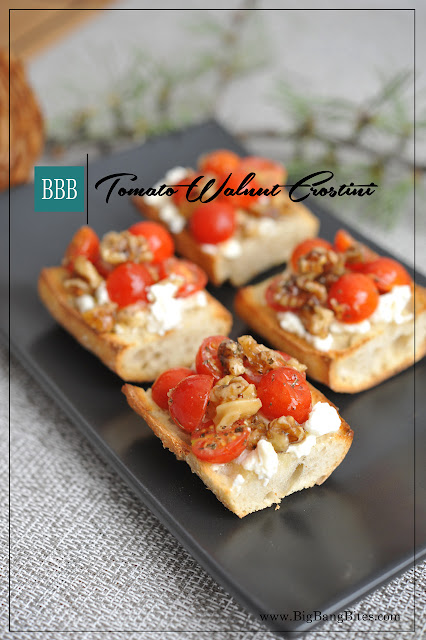 Stir the whipped cream cheese to soften it. Add the feta cheese and stir to combine. Set aside.

Put the walnuts in a zip lock bag and gently smash them into smaller pieces. This will bring out the oils. Cut the tomatoes in half and place in a bowl along with the walnuts. Add the parsley, olive oil, lemon zest, and lemon juice. Add salt to taste.

Cut the baguette in half length-wise. Then cut the halves into 2-inch pieces. Toast them lightly. Spread with the cheese, then top with the tomato and walnut mixture.