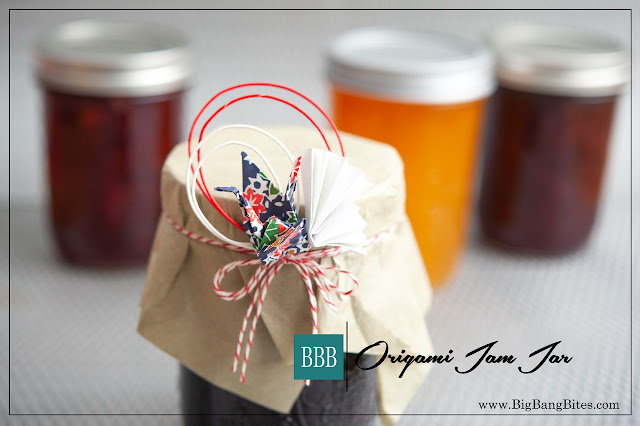 Every time I give away my homemade jam, I try to come up with a new design to decorate the jar. I know it’s easy to simply top the jar with a piece of fabric and tie it on with some string or ribbon, but I like my jams to be a gift that gives twice. I'm sure I've said that before. First, it’s a yummy home made treat. Second, it has aesthetic appeal because well, it is a gift after all.

This origami theme came from Lindsay, who happened to be preparing her presentation of a Japanese snack for her office’s multi cultural day. She was folding Japanese cranes for her tray and it gave me an idea for my jam jar. As a kid, I remember poring over origami books and trying my hand at the intricate folding art, making all kinds of animals. But the crane, orizuru, remains as the classic origami figure. You can go online to see how to fold it.

The red and white loops are mizuhiki cords. Mizuhiki is an ancient Japanese art form that is a thin decorative cord made from tightly wound rice paper. Instead of ribbon, it is used to wrap around gifts or formed into intricate knots. It comes in long lengths and in different colors, but the one I used is red and white. I simply cut it into short pieces, shaped it into loops and glued gunned them onto the jar.

The little white fan is just made from regular paper. Instead of folding it in half to make a fan, I folded it off center, so I got two levels to make it a bit more interesting.

I hope this jam jar gives you some inspirations, as the idea can be transferred to a boxed gift or wine bottle. 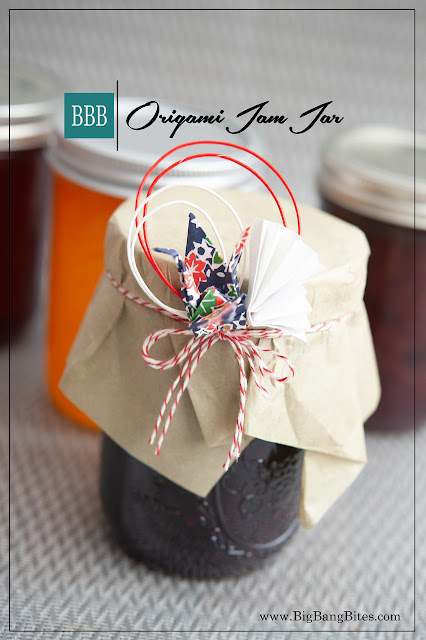