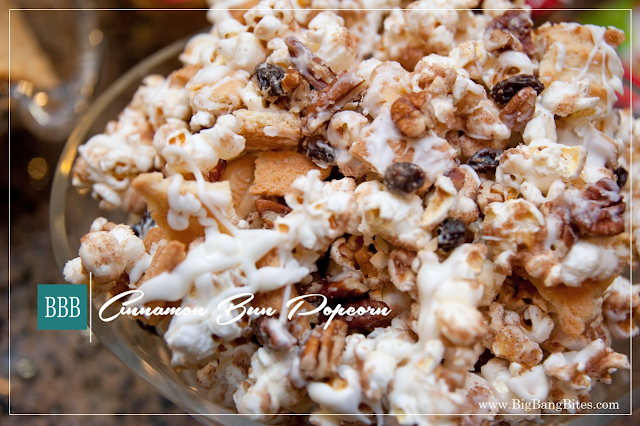 Popcorn with raisins, pecans, and chunks of shortbread cookies smothered in a buttery cinnamon glaze and drizzled with a white chocolate icing.

I’m probably one of the few people who doesn’t like popcorn. I don’t even like the smell of it when I walk into a theater. Sounds kind of un-American, but I wasn’t always like this. My aversion to it started when I was pregnant with my first daughter, Sunny. It was just one of those pregnant things. Some people have cravings, I hated popcorn. Sorry, Orville.

So, why am I sharing a popcorn recipe? Well, with so many kinds of flavored and embellished popcorn, I’ve discovered a new appreciation for it. I love a dressed up popcorn, so I decided to make it taste like a favorite dessert. The cinnamon bun. So, today I’m sharing my Cinnamon Bun Popcorn, which is like a deconstructed cinnamon bun. It’s smothered in a buttery cinnamon glaze, and of course, there are raisins and pecans in it. Broken chunks of shortbread cookies mimic the bun and you’ve got to have an icing, so I used white chocolate. This is a very forgiving recipe, so if you want more raisins, pecans, or white chocolate, just increase the amounts.

For Christmas, I filled clear little containers that looked like mini paint cans and tied them with ribbons. I gave them to my holiday party guests as favors. When I get around to it, I’ll post that idea with a picture on my Party Favors section, which I hope to have installed soon. 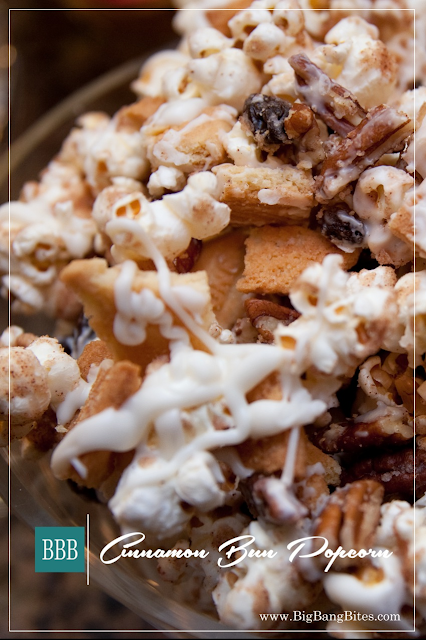 Rough chop the pecans, leaving some quite large. Put the popped popcorn and pecans in a large bowl. Combine the butter, sugar, and cinnamon in a large measuring cup and microwave until the butter is melted. Stir and microwave another 30 seconds. All of the sugar may not be dissolved, but that’s okay. Pour over the popcorn a little at a time and toss to coat. If for some reason your mixture is very sugary, you can microwave another 15 seconds.

Pour the popcorn mixture onto 2 separate baking pans or cookie sheets with raised sides. Bake for 15 minutes at 300 degrees. Cool completely, so the popcorn will become crispy again.