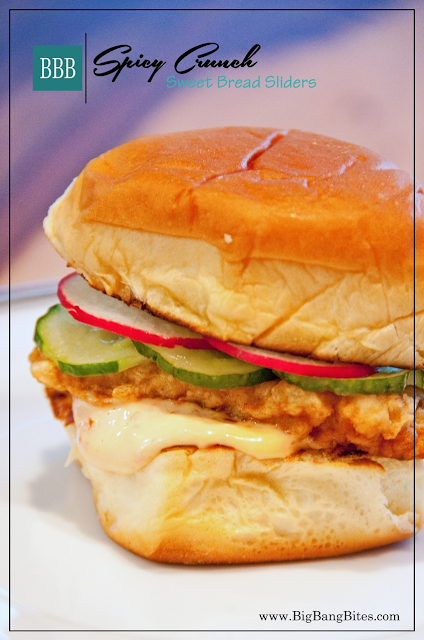 Fried chicken on Hawaiian sweet rolls with pickles and a spicy sesame aioli.

I remember when my elementary school would have fundraisers, we didn’t sell chocolate bars like the kids do today because we didn’t have See’s candy stores. We sold King’s Hawaiian Original Sweet Round Bread for a dollar! Yes, it was pretty cheap when the dinosaurs roamed the earth. And even though it was pretty much a staple, they sold like hot cakes.

Growing up in Hawaii, we ate a lot of Hawaiian sweet bread. In fact, way back then, they didn’t make the little sweet rolls we have now. It only came in an unsliced loaf, so what a treat it is to have these dinner rolls today. They’re soft, moist and lightly sweet. And they make great sliders.

My Spicy Crunch Sweet Bread Sliders are like a party in your mouth. The sweetness of the rolls and quick pickles blend perfectly with the saltiness of the fried chicken and the spiciness of the sesame aioli. And just so you don’t get turned off by the homemade pickles. They’re fast! By the time you’re ready to assemble the sliders, they’ll be marinated and done.

Start the pickles first. Mix the Japanese vinegar and sugar, stirring until sugar is dissolved. Set aside. Thinly slice the cucumbers and toss in a bowl with a generous amount of salt and set aside.

Prepare the dressing by mixing the mayo, Sambal Oelek and sesame oil in a bowl and set aside.

Slice the radishes into 36 pieces and set aside.

Butterfly the chicken breasts and cut into 12 square pieces. They might look small, but they will flatten out  once you pound them with a meat tenderizer. Sprinkle with the garlic salt and pepper, then dredge the pieces in the flour. Fry in oil until golden.

Cut the rolls in half like a bun. You can lightly toast them, as in the picture, or leave them the way they are. I like them either way. Spread some sauce on the bottom piece. Add a piece of chicken and top with a few pieces of pickles and 3 slices of radish.