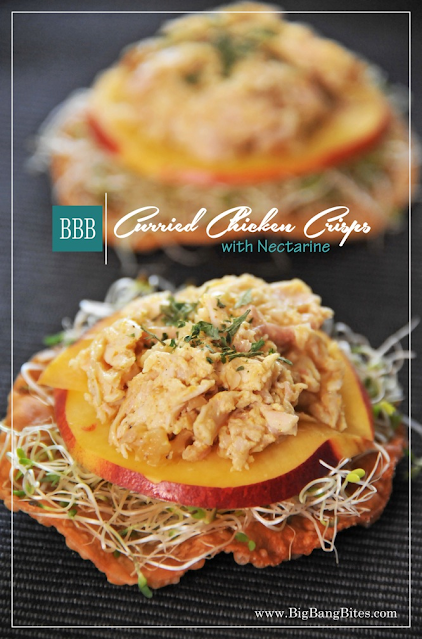 A belated Happy 2014 to everyone! I had great plans to share some hearty appies for New Year's Eve parties, but I ended up in bed on Christmas night with an awful bug that lasted for days on end. My husband, Kerry, and I were invited to our friends’ home for a dinner party on New Year's Eve, but I stayed home in bed with my box of tissues.

So, here I am ten days later, still with a cough, but I’ve been anxious to share this appetizer that my family loves. They’re my Curried Chicken Crisps with Nectarine. The crispy rounds are made from wonton wrappers. I like them better than cutting corn tortillas into small rounds because they’re lighter and crispier, and they’re already just the right size. This is not a bite size appetizer. You’ll get a few bites out of this one, so they’re great for “small plates” parties.

Bake the chicken for about a half an hour at 350 degrees. Cool and shred into fine pieces, chopping it if the shreds look too big. While the chicken is baking and cooling, fry the wonton wrappers in about a half inch of oil on medium heat, turning once. They brown and crisp pretty fast…in about 10 seconds, so use a small frying pan and only do a couple at a time. Drain on paper towels and set aside. These can be made the night before and stored in an airtight container.

Mix the chicken with the mayo, curry, walnuts, salt, and pepper. Set aside. Probably the trickiest part of the recipe is slicing the nectarines because of the seed. First, make a vertical cut all around the nectarine, like you do when you cut open an avocado. Next, slice a half inch off the top of the fruit. The next cuts will be your 1/8 inch slices. When you get to the seed, you’ll have to cut around it. Because you've made that vertical cut, you should end up with 2 half rounds of fruit per slice. You can see that in the picture. Don't worry if the slices aren't perfect because the chicken will cover it.

To assemble, spread some alfalfa sprouts on the wonton. Next place two half rounds of nectarine, making a whole slice. Finally, top with chicken and sprinkle with chives or parsley.