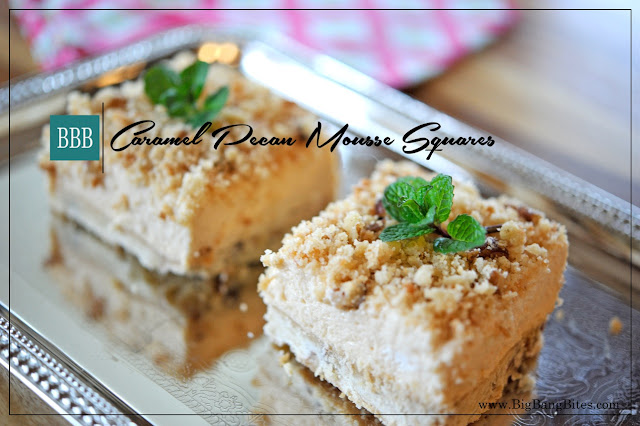 It’s burn season right now. I know that probably doesn’t mean anything for your city mice. But for us country mice, that means we can burn leaves and brush on certain days in our county. When Kerry has the fire going, I like to grab a long stick and roast marshmallows while I’m bundled up on the sidelines. But a bag of marshmallows is a lot of marshmallows, so Pecan Caramel Mousse Squares became the dessert of the day.

There’s nothing like a light and fluffy chocolate mousse, or even a delicate lemon mousse we can spoon into. But what about a caramel mousse? Sound intriguing? Salted caramel is all the rage right now, so you caramel lovers are going to be in heaven with this recipe.

The fluff in this mousse dessert is made with marshmallows. Melted marshmallows. You know, the creamy, fluffy part that oozes out when you bite into a perfectly roasted marshmallow. Then it’s blended with melted caramels and whipped cream, and poured over a pecan shortbread cookie crust. Trust me, your guests and family will flip over this. In fact, if you’re making this for guests, print out the recipe in multiples before hand because they’re going to ask you for it.

I want to say the crust isn’t crumbly and soft. It’s really more like a cookie, crisp with a firm bite. I thought about changing the recipe to create something more delicate and flaky, but everyone said a resounding no, they like the crunch. I made it twice before posting it to be sure.  Both times, everyone repeated that they liked the crunchy cookie texture of the crust, so I kept it that way.

This is a great make-ahead dessert because it needs to chill over night anyway. 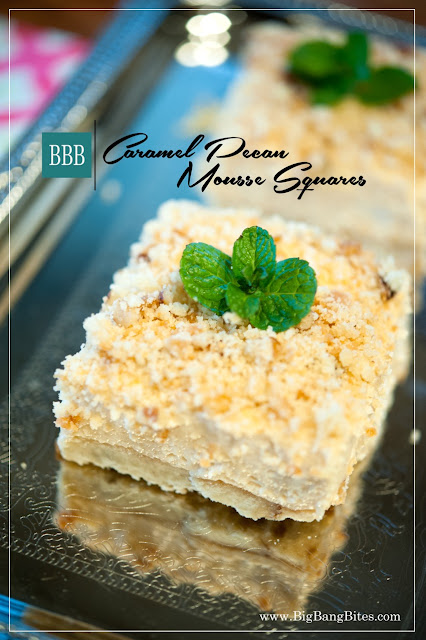 Make the crust. Combine the flour, powdered sugar, and softened butter. Using a pastry blender, blend the ingredients until the mixture has pea size pieces. Remove ¾ cup of the mixture and set aside. Line an 8 X 8 inch baking pan with parchment paper with the paper overhanging the edges. Press the mixture into the pan. Press the ¾ cup mixture into a 6-inch circle on a cookie sheet. Put both of them in the oven at 375 degrees. Bake the cookie for 12 minutes or until golden. Remove from oven and cool. Bake the crust for about 21 minutes or until golden. Remove and cool.

You will need a double boiler for the filling. Put the unwrapped caramels, marshmallows, and milk in the top pot of the double boiler. Place the pot over, but not touching the gently boiling water of the lower pot. Cook and stir the ingredients until the mixture is completed melted and smooth. Remove from heat and set aside to cool to room temperature.

When completely cool, whip the cream until peaks form. Fold the caramel mixture into the whipped cream.

Pour over the cooled crust. Break up the cookie into crumbs and sprinkle over the mousse. Refrigerate over night.

I like to lift the dessert out of the pan to cut because of the firm crust. The overhang of the parchment paper allows you to do this.