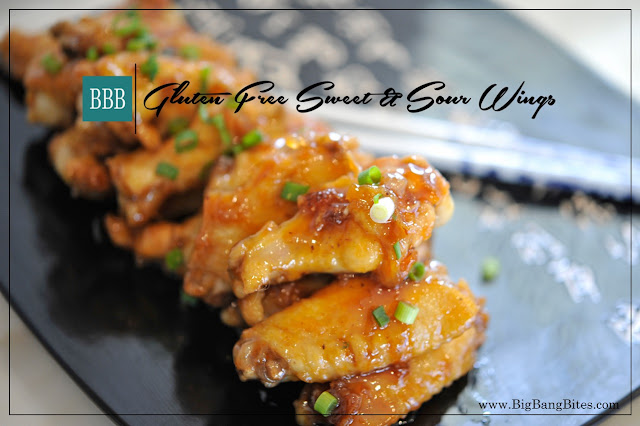 These baked chicken wings glistening with a sticky sweet and sour glaze are so delicious, you won’t believe they’re gluten-free.

On my previous post, I made Sweet and Sour Wings the traditional way where the chicken is dredged in flour and fried before glazing with a sauce. But I have a friend who can’t have gluten, so I thought I’d share the same recipe without gluten. It’s actually amazing how good it is without any flour coating.

When I made the traditional wings on my previous post, I made these at the same time. I plated them for dinner and had everyone eat both. I thought the coated and fried wings would win hands down, but aha! It was a draw. Everyone liked it both ways. That was a nice surprise.

I also have another friend who doesn’t like to fry anything. If a recipe calls for frying or deep frying, she just won’t make it. It’s not a diet thing for her. She says she doesn’t like cleaning up all the oil splatters after frying things. I can appreciate that because I have a glass top stove, so I can just spritz and wipe. No burners to pull off and clean!

Also, besides being gluten-free, these have fewer calories, since they aren’t fried. So, if you’re counting calories, this could help a little. I say a little because it does have sugar in the glaze. So, whether you’re gluten-free or cutting calories, these somewhat trimmed down wings won’t disappoint you. They're still tangy and sticky, and they'll hit that sweet and sour spot you're craving.

Note: For those of you who are gluten free, but still want fried wings, you can substitute the flour with quinoa flour. 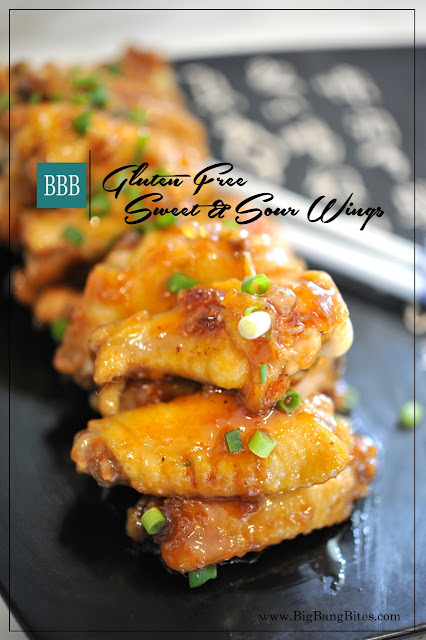 Combine the ingredients for the sauce and cook over medium heat for about 4 minutes until slightly thickened. Set aside.

Remove the wing tips. Cut the wings into two at the joint. Dust lightly garlic salt and pepper.

Line the wings in a single layer in a baking pan that has been lightly oiled, so the wings won't stick. Bake at 350 degrees for about 20 minutes.

Pour the sauce over the chicken and bake for another 20 to 25 minutes. Don’t turn the wings, but baste occasionally to create a glaze.

Plate the wings and sprinkle with chopped green onions.