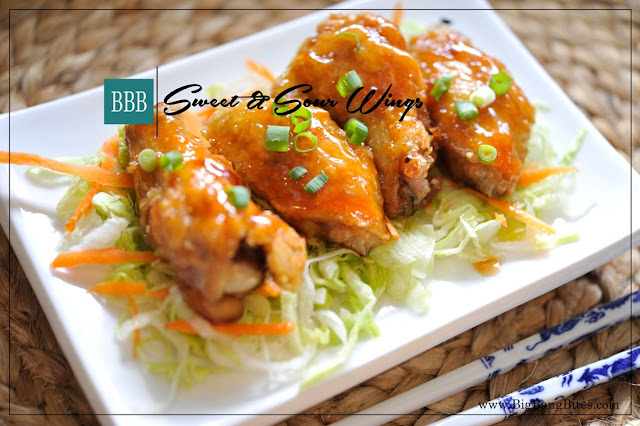 An Asian favorite, these chicken wings are fried crisp, then finished off in the oven with a sticky sweet and sour glaze.

These are the Sweet and Sour Chicken Wings I grew up eating. It’s my mom’s recipe, hand written on a now brown with age card, so it has to be fifty years old or more. But I kind of tweaked it a bit. And now I’m sharing it with you. It’s not too sweet with just the right amount of tanginess.

The kids were really happy when I decided to make this for the blog because it meant that’s what they were having for dinner. I made some stir fry veggies and hot rice, and voila! Well, that’s French, but I don’t know the word for “there it is” in Chinese.

Around the dinner table, we recalled when Lindsay studied in China during her MBA program. How excited those kids were that they could eat yummy Chinese food everyday!  Well, not so. They saw no chow mein or any other noodle dish, no sweet and sour, and no orange chicken!  What? It must have been a very loud echo with thirty students when they were sadly told, “orange chicken is not Chinese food.”

This recipe can be adapted to pork also. If using ribs, tell your butcher to cut them into two inch pieces. You can also use boneless pieces of pork.

Some sweet and sour recipes have you batter the wings for frying, and others have you dredge the wings in flour. This recipe has some cornstarch in the dredging mixture, which makes the wings crispier. Yes, it’s going to be coated in a sauce while baking, but it does make a difference. It keeps it lighter and not so doughy. 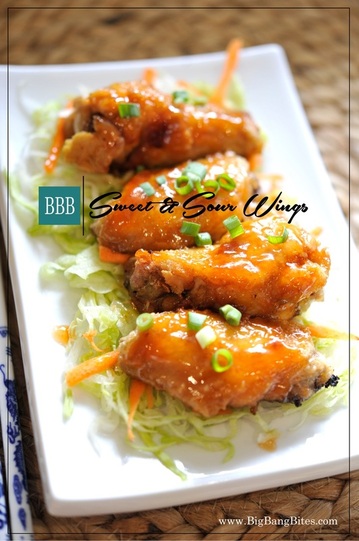 Combine the ingredients for the sauce and cook over medium heat for about 4 minutes until slightly thickened. Set aside.

Remove the wing tips. Cut the wings into two at the joint. Dust lightly garlic salt and pepper.  Combine the flour and cornstarch and dredge the wings in it. Fry until golden brown in about a quarter inch of oil. They don’t need to be done as they will cook in the oven. Drain on paper towel.

Line the wings in a single layer in a baking pan. Pour the sauce over the chicken and bake for 20 to 25 minutes at 350 degrees. Don’t turn the wings, but baste occasionally to create a glaze.

Plate the wings and sprinkle with chopped green onions.