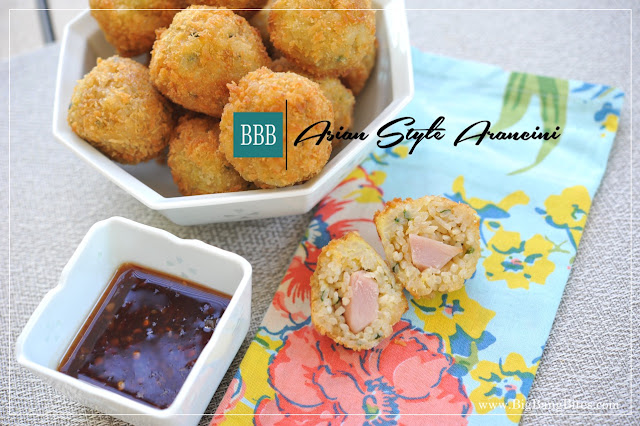 So what is an arancini? It comes from Italy and it’s a stuffed rice ball, the size of a walnut…often risotto…that is covered with bread crumbs and fried to a crisp. Usually there is a piece of cheese in the center that oozes out when you bite into it. They are delicious. But, sometimes it’s just a fried rice ball mixed with parmesan served with some marinara sauce for dipping. That’s how it’s made at a favorite local restaurant where I met a girlfriend for happy hour not long ago.

Anyway, I always wanted to make an arancini for my blog, but hesitated because it wouldn’t be very original, so I had to put on my thinking cap. Well, after Easter, I had a lot of ham left over and I kept chunking it off to make a variety of things. One night it was fried rice with ham in it. Bingo! That gave me the idea of an Asian Style Arancini.

I made some fried rice and instead of a cheese center for my arancini, a cube of ham was the surprise. And instead of bread crumbs, of course, I had to use Japanese panko. I love that stuff. You know, in the old days, it didn’t come in a bag. It’s amazing stuff that no cook can live without today. If you’ve never used it, it’s white crispy bread crumbs that you can use to coat anything you want to fry or bake. And it adds the lightest crispy crunch you could ever imagine.

Okay, back to my Asian Style Arancini…I think it turned out great. It really doesn’t need a dipping sauce, but I concocted one anyway to make it more interesting if you must dip. But eat these while they’re hot and crispy! 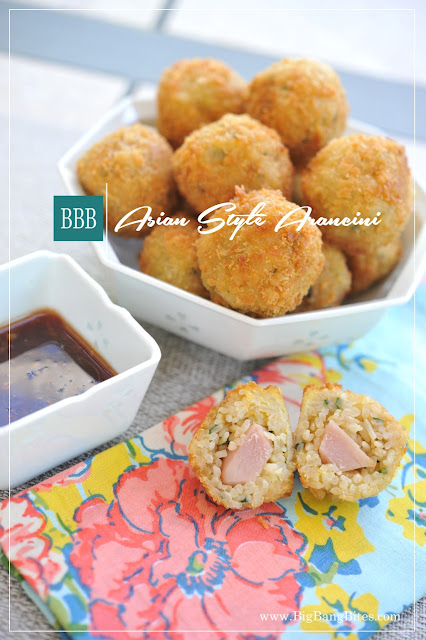 Put about a tablespoon of oil in a frying pan and cook the garlic just until fragrant, but not brown. Add the rice, breaking up chunks as you cook. Add the Serrano pepper, finely chopped with seeds and membranes removed, if you’re using it.

Sprinkle the soy sauce and fish sauce all over the rice, so it can be evenly distributed. Toss and cook until well blended. Test for saltiness, especially if you did not use the fish sauce, and add salt to your taste. Add the chives and cook for a couple of minutes. Remove from heat.

Whisk one egg with about a teaspoon of water. Use the second egg if only needed. Set aside. Put some flour in a plate. Put some panko on another plate.

Using the scoop, pull out a level amount of rice. Dampen your hands and cup the rice in your palm. Make an indentation and press the ham inside. Squeeze your palm, bringing the rice to envelop the ham. Roll into a nice ball.

Dredge in the flour. Dip into the egg. Roll in the panko. Fry in about a half inch of oil until brown.

Serve warm with or without dipping sauce.