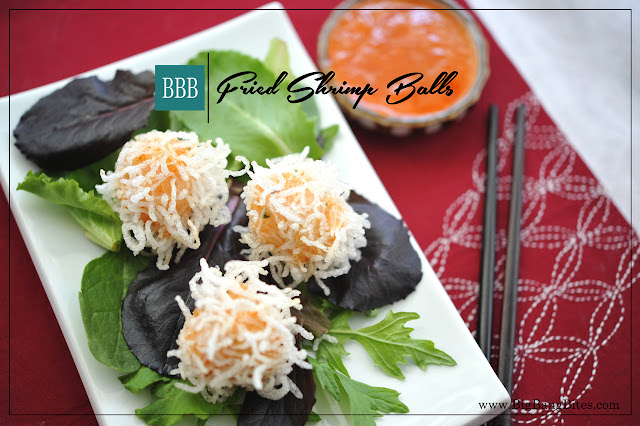 Fuzzy deep fried shrimp balls are covered with crispy bits of rice vermicelli and served with a tangy orange dip.

Fried shrimp balls are a popular dim sum dish. A lot of Chinese restaurants serve this with some kind of sweet and sour dip. But you usually see the shrimp balls covered with crispy won ton strips.

I thought I’d do something different and use rice vermicelli instead of won ton strips. I find the vermicelli more tender and delicate than the chunky strips of won ton, yet still very crispy. It gives it kind of a fuzzy effect. At first, I thought of calling them fuzzy shrimp balls, but I got a few raised eyebrows, even though there really is a Chinese dim sum called fuzzy meatballs.

There are two kinds of vermicelli, but both are very thin noodles. Italian vermicelli is pasta, such angel hair. Asian vermicelli looks different, as it’s made from rice, mung bean, or corn starch. Sometimes Asian vermicelli is called bean threads, cellophane noodles or glass noodles. You can use any of these, depending on what your Asian food aisle carries.  Although the vermicelli is like dried pasta, I did have a problem breaking it into little pieces, as it’s kind of wiry. I ended up using my kitchen shears to cut it into small pieces.

The shrimp for this is chopped up in the food processor, almost into a chunky paste. But back in the day, I remember my dad making these and hand chopping the shrimp armed with two cleavers, hashing away on the cutting board. The food processor is so much easier and quicker. And less dangerous. 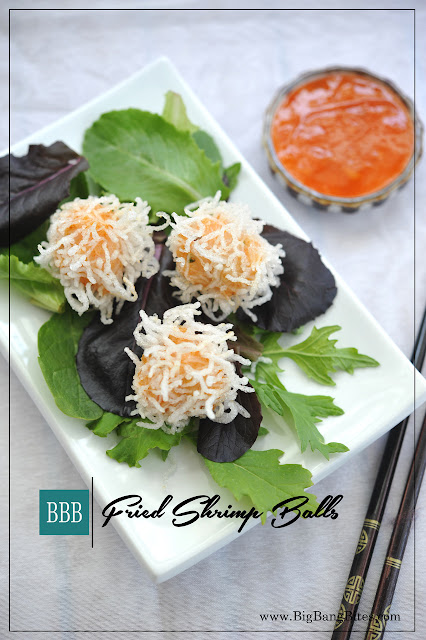 Place shrimp without shells or tails in food processor. Pulse until a paste is formed. Add the salt and cornstarch. Pulse until combined. Place shrimp paste in a bowl and stir in the chives. Refrigerate for a couple of hours to firm up.

Cut with kitchen shears or chop the vermicelli into half inch threads. Set aside. Place enough oil in a small pot so the shrimp balls can float and maintain their shape.

Form one inch balls of shrimp. You can dampen hands with water to avoid sticking. Roll in the vermicelli. Fry in the oil for a couple of minutes, as shrimp cooks pretty fast. The vermicelli will puff up and remain white. It should not become brown.

For the sauce, combine the sweet chili sauce and juice of the orange in a small pot. Combine the water and corn starch in a small bowl and set aside. When the sauce begins to boil, add the corn starch mixture to thicken it. Serve with the shrimp balls. 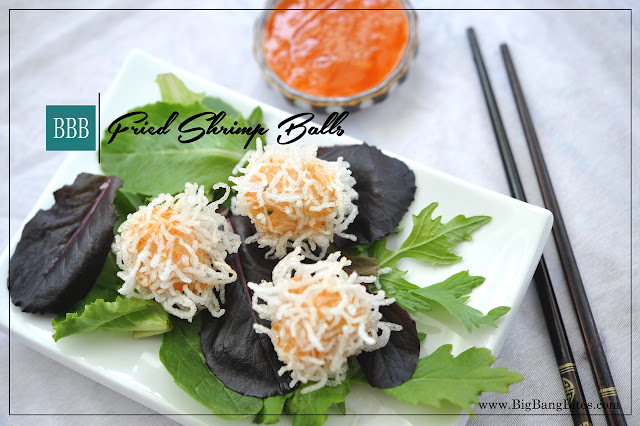