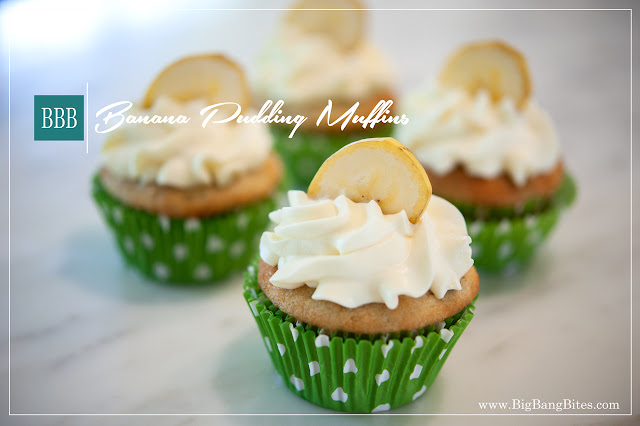 Moist banana muffins filled with a banana pudding center and crowned with a whipped banana topping.

A lot of times during the midday news, restaurants or food vendors are featured. One day, a couple whose main product was banana pudding caught my attention because I love bananas. Chewy banana candy, banana ice cream, banana bread, banana cream pie, a banana by itself, you name it. Do you know when I was a kid, there used to be banana popsicles?! Kerry doesn’t remember that. Maybe it was a Hawaiian thing. We even had vanilla milk popsicles!

Anyway, the banana couple gave me the inspiration to create a banana treat. I used the same recipe for the muffins as I did for my Banana Muffins with Walnut Crumble. But I turned it into a triple threat treat and really went bananas over it. With my Banana Pudding Muffins, you get an intense banana flavor with every bite because it’s a banana muffin with a banana pudding center and it’s covered with a cool, whipped banana topping. ​

Because it has pudding in it and the frosting is fluffed up with whipped cream, these have to be kept in the fridge. But I kind of like it cold. It’s refreshing. Makes me think about those banana popsicles of yesteryear, which by the way, cost 6 cents! If they brought back that flavor, I’d definitely start eating popsicles again. 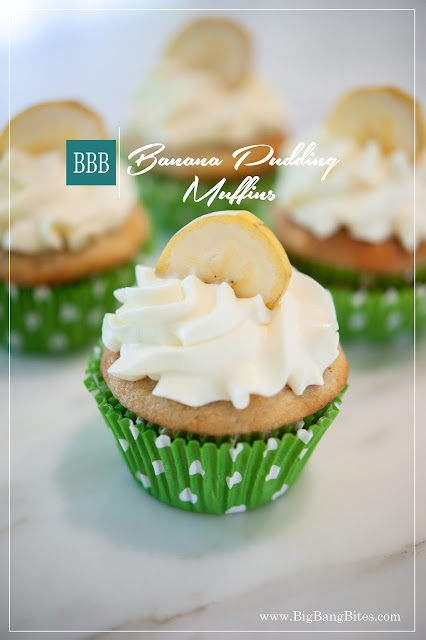 Make the pudding with the 3 cups of whole milk, following the box directions. Cover the bowl with the saran wrap touching the surface of the pudding, so a skin doesn’t form. Place in fridge to firm up.

Mash the bananas with a potato masher until smooth. Add lemon juice. Blend and set aside.

Cream shortening and sugar with electric mixer at medium speed. Add eggs and beat until very light and fluffy, about 4 minutes.

Combine the dry ingredients and add to the mixture alternately with the milk, blending well after each addition. Fold in the bananas by hand.

Fill muffin cups about 2/3 full. Bake at 350 degrees for about 15 to 18 minutes, or until a toothpick tester comes out clean. Cool completely.

Remove a plug from the center of each muffin. I use an apple corer. Put the cores in a bowl for snacking. Fill each hole with some banana pudding.

Whip the heavy cream. When it starts to fluff up, gradually the sugar. Beat until stiff peaks form. Fold in the remaining pudding into the whipped cream. Frost the muffins by hand, or use a piping tip. Serve immediately or store in the fridge until serving time. You may garnish with a thin slice of banana if you like.