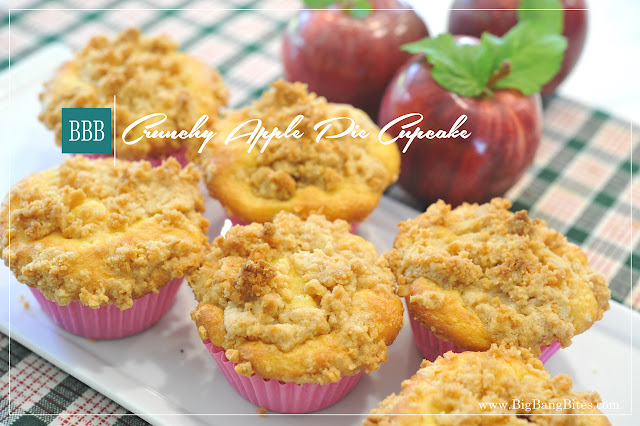 With the covid virus, I haven’t been doing much cooking or baking for fun. Shelves are absent of flour and sugar, and meats are limited per customer. But I’ve been itching to create something, so I used a cake mix for this recipe, instead of making cupcakes from scratch. These are crazy times, so we just have to go with the flow, instead of fighting it.

I like a filled cupcake because it feels more like a dessert. Had a few apples that I just bought, but they weren’t very crunchy. Don’t you hate when that happens? So, I decided to make something with them. Since they weren’t very crispy in the first place, making an apple pie filling fit the bill.

But a vanilla cupcake filled with apples…ho hum. Then the light bulb went on and I thought, what makes a great apple pie? The buttery, crispy crust on the rim of the pie. So, I wanted to emulate that sensation in a cupcake. I could have covered them with a basic crumb topping, but I wanted a real caaa…runch!

Making a pie crust with crushed Oreo Golden vanilla sandwich cookies and butter came to mind, and I thought, why not? Instead of a crust, why not reverse things and use it as a topping? It worked beautifully! Sweet, really crunchy, and it gave my cupcakes originality. You have to try this recipe. Everyone who sampled these had their eyes out on sticks!

And maybe next time, chocolate cupcakes with a chocolate Oreo crunch topping. Whoa!! 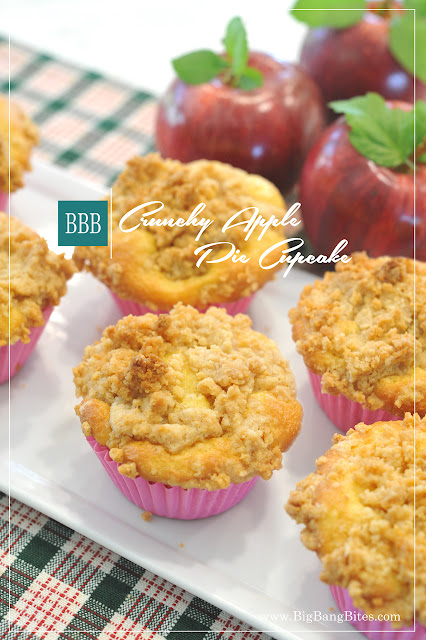 Peel and chop the apples into somewhat of a small dice. Cook over medium heat with the half cup of water, dash of cinnamon, and sugar until tender. If apples are dry, add a splash more of water.  Test for sweetness in case you’re using a tart apple. Mix the 2 tablespoons of water with the cornstarch and slowly add to the simmering apples. Mixture should be thick. You may or may not use all the cornstarch mixture depending how much water your apples produce. Set aside to cool.

Break up the Oreo cookies and place in food processor. Add the butter in small pieces. Pulse until well combined as if you were preparing it for a pie crust. Set aside.

Combine all the ingredients for the cupcakes. Pour a couple of tablespoons of batter in each paper cup. Divide the apple mixture among the cups. Top with remaining batter. Squeeze cookie mixture into kind of flat clumps and top each cupcake. Bake at 350 degrees for about 16 minutes. Test with toothpick.