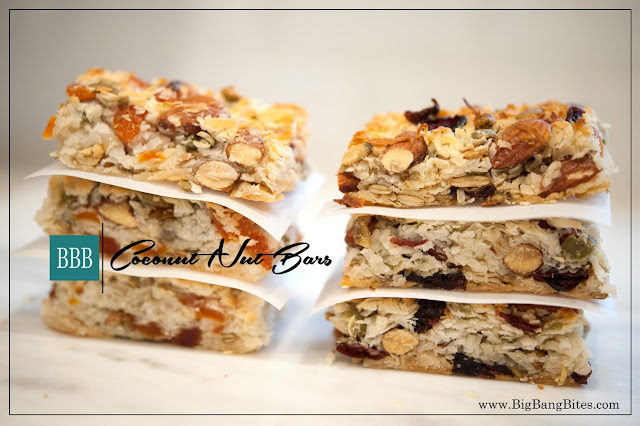 Finally, bye bye winter…hello spring! Time to clean up after winter and pull the weeds that the heavy rains have spurred to glory. Why do weeds grow so fast? Why can’t my garden veggies and plants have the same gusto? Can a scientist isolate whatever it is in weeds and put it in a jar, so we can sprinkle it on all the good things growing?

After a day of cleaning up around here, Kerry and I needed a snack. So, I scanned the cupboards and found a bunch of things I usually have on hand. I always have dried fruit and nuts because they’re my go-to snacks, stuff I graze on all day. I found a bag of shredded coconut that was going to expire and a can of condensed milk that I mistakenly bought because I thought I had picked up evaporated milk.

Mixing condensed milk with coconut is a basic coconut bar recipe that’s been around a long time, but it is really sweet. So I added dried apricots and cranberries for some tartness.  Salted almonds and pumpkin seeds gave it some crunch and saltiness to cut into the sweet milk.

To get two flavors in one pan, I split the coconut mixture in half, then added apricots to one portion and cranberries to the other one. I still used one pan and pressed each mixture onto its own half. The result is almost like a fruity coconutty energy bar. 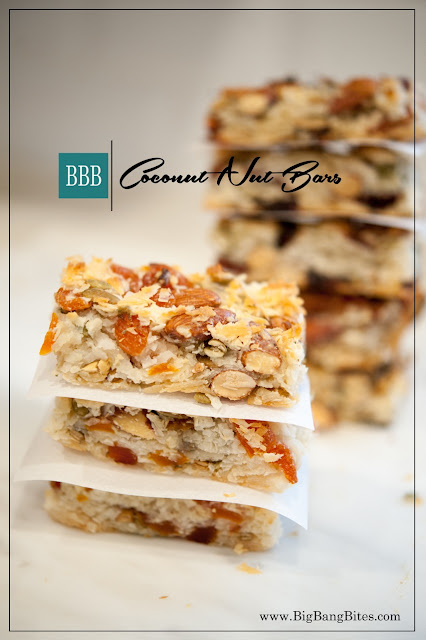 Put the coconut in a large bowl and sprinkle with the salt. Add the condensed milk and vanilla. Stir well to coat the coconut. Add the almonds and pumpkin seeds to the mixture and mix well.

Separate the mixture into two bowls. Add the apricots to one half and the cranberries to the other half.

Line the pan with parchment paper with the edges over hanging the sides. Spray with nonstick spray.

Press the apricot mixture on one half of the pan. Press the cranberry mixture on the other half, making sure the center meets seamlessly.

Bake at 350 degrees for 25 to 28 minutes until golden around the edges.

Cool. Lift out the whole thing using the parchment overhang. Place on a cutting board and cut into pieces by pressing the knife straight down, not in a sawing motion. This will keep the bars intact.