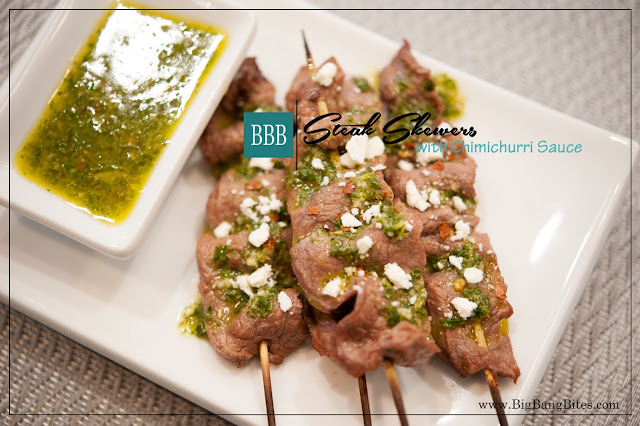 Tender ribbons of flank steak drizzled with a fresh and tangy chimichurri sauce, and dotted with feta cheese.

I have to admit, I don’t prepare a lot of beef. So, when Kerry heard I was doing another steak skewer, he was doing the happy dance around the kitchen.

If you’ve never had chimichurri sauce, you need to give it a try. It’s not just great on steak, but delicious on chicken, other meats, and seafood. And talk about quick and easy, this sauce needs no cooking. It’s a raw sauce.

It comes from the cuisine of Argentina, but it’s believed to have originated in Basque. Today it’s popular everywhere. And there are many variations depending on what you want to use, or for me, typically what I have available in the fridge and pantry.

Chimichurri is an uncooked sauce for grilled meats with olive oil and parsley as a base. It also usually has oregano, red pepper flakes, garlic, and vinegar, but variations can include paprika, cumin, lemon juice, thyme, basil, rosemary, cilantro, and bell peppers. As you can see, it’s pretty much your choice for flavors.

It doesn’t usually call for a sprinkle of feta cheese, but that was the variation I chose because my family likes it that way. I also think it adds a saltiness that complements the tanginess of the sauce. I happen to prefer goat cheese, but I always get outnumbered when it comes to the two cheeses. So, for this recipe, I went with the majority. But off camera, mine had goat cheese anyway. You can do the same.

So, when I say have fun with this recipe, I really mean it because after the parsley, olive oil, and garlic, the sauce becomes your own creation. 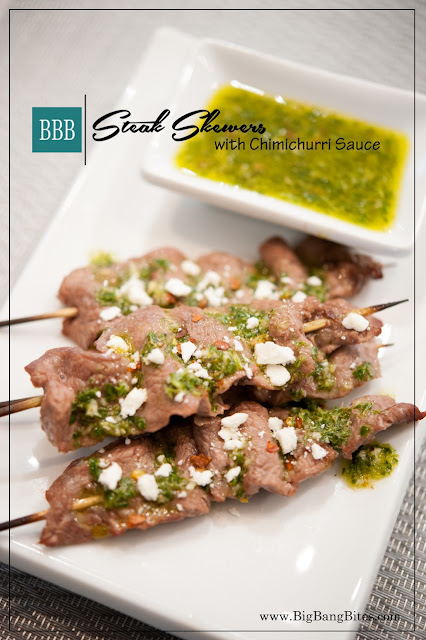 Freeze the flank steak until half frozen. If it’s already frozen, thaw it out half way. This makes it easier to slice. Using a long knife, cut quarter-inch slices against the grain and at a slant to get a wider slice. Skewer the ribbons of meat onto the bamboo sticks and lightly salt. Set aside.

Rough chop the de-stemmed parsley. You should have at least one cup. Place the parsley and all the other ingredients, except the feta, in a blender and puree into a sauce. Set aside.

Grill the meat for 2 minutes. Turn over and grill another minute and a half.

Plate the skewers and drizzle with the chimichurri sauce. Sprinkle with crumbled feta cheese. Serve remaining sauce on the side.