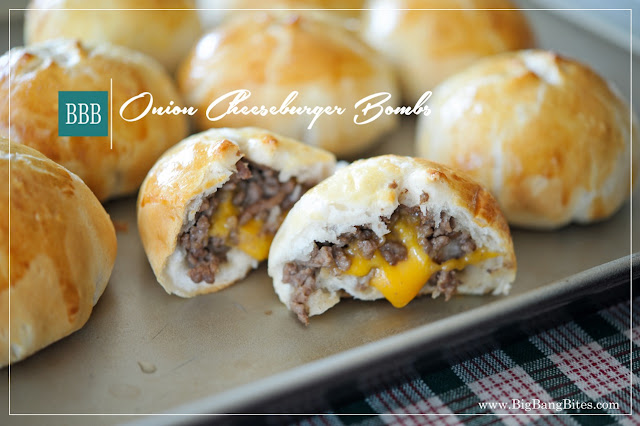 When I was a little kid, my dad would make something he called Super Burgers. I don’t know if he got this idea from a recipe, or because he was a good cook, he made this up. Dad’s been gone a long time, so I can’t ask him. But his Super Burger was the simplest thing and I loved it. He’d put this onion burger mix between two buns with nothing else on it, and it was perfect.

I even took this recipe to college…well, it’s not even a recipe when I tell you how it’s made…but it served me well as a poor college student, who couldn't afford much.

So what’s the simple secret? A pound of ground beef and a packet of onion soup mix. What? How crazy is that? Two ingredients!

To morph it into a Big Bang Bite, I turned it into a bomb made with a tube of Pillsbury Grands Biscuit. So Dad’s Super Burger has become a simple burger bomb…with cheese added... that’s not just a great small plate dish, but a delicious lunch food. Like Super Burgers. 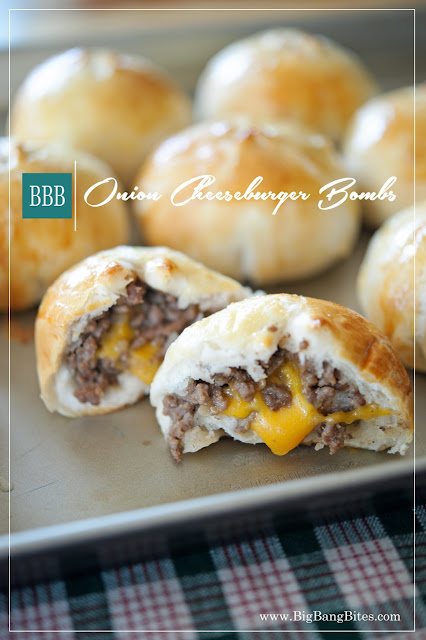 Cook the ground beef in a little oil. When the beef is about half cooked, add the soup packet so the onion bits can re-hydrate in the juices. Simmer for three minutes.

Add the flour gradually, stirring to combine. Simmer for another three minutes to cook off the flour taste. Set aside.

Cut the cheddar into sixteen cubes. They will be approximately three quarter-inch squares.

Using your fingers, stretch the biscuit dough mainly on the outer edges until it’s a four-inch circle. You don’t want to stretch the center of the circle, otherwise it will get too thin.

Place a tablespoon of meat on the biscuit. Put a cube of cheese in the center.

Cup the biscuit in the palm of your hand and bring the edges together, pinching the dough to stick together. You can smear some of the egg wash to help it stick. Shape into a round ball.

Place each bomb on a parchment-lined cookie sheet. Brush with egg wash. Use a pair of scissors to snip an X on the top to let the steam out.

Serve warm while cheese is gooey.